It was late July and the mercury had been pushing thirty all afternoon. I’m guessing this, of course, as I haven’t laid eyes on an actual thermometer all year… but my Blackberry was telling me that it was, in fact, a stonker of a summer’s day, and even if there’d been a technological blackout, the masses of people lounging semi-naked along the banks of the Maas, and the fact that the chilled beer I’d just got from the Albert Heijn was already less-than-chilled, made it quite apparent.

We were approaching the very end of our twelve month stint in this middle-European cultural paradise. Indeed, some had already bid their farewells and flown on to whichever corner of the earth their adventures would take them to next. For those still remaining, though, the atmosphere was not one of sadness. We were still here, and there was a buzz we had not felt before, as if the departure of our peers had bestowed upon us a renewed sense of urgency in which we knew we had to give every last one of our remaining hours together everything we had. Memories can be created even in the final act, after all.

At least, I thought that’s what I felt, although it could have just been the sun messing with my cingulate cortex. Either way, as we settled down in our favourite spot by the old watchtower, sipping slightly-warm Grolsch and sharing stories of the past 350 days as the sun dropped, this one wasn’t going to be just another summer’s night in Maastricht. The clouds and the sun clearly shared this sentiment, and they began to do their thing and spread purple and orange shapes all across the sky.

There is a modern bridge over the river called the Hoge Brug (in English: high bridge). It’s one of these new-fangled suspension-type bridges, with a flat walkway for humans to use, and an arch over the top holding the span up with steel cables. Just then, there were about a hundred birds sitting on the arch, and, like the bridge itself, they were silhouetted beautifully against the sunset. I wanted to be up there too.

This is the Netherlands, where they trust in Darwinian logic and there’s no security spikes or fences to keep people from doing stupid things. I’d been over that arch before, too – one night on the way back from a party, a couple of friends and I had casually walked up, taken some pictures of the city from above, and casually walked down. It’s pretty windy up there, but wide enough so that you’re not really too afraid of being blown off, and under the cover of darkness in the deserted wee hours, it felt like we could get away with it without being seen slash arrested.

This was different, though. It was still daylight, and the banks of the river were packed with more people than I’d seen there all summer. There were also bound to be policemen out and about making sure people weren’t waving their alcohol around in a way that might be considered lewd. I thought about it seriously for a few minutes, as the sky got oranger and oranger, and decided that only one thing was certain in that moment. If I didn’t go up there, right now, it was going to be too late and I would regret it for the rest of my life.

“hold my beer” I told one of my companions. (Yes, i literally said that – it’s my favourite cliche phrase)

“you’re going to want to get this on camera” I shouted at the rest as I jumped up and ran towards the bridge.

They stared after me as I ran on to the bridge, and carried on running, straight across the pedestrian walkway to the other side (my logic was that once I had come down, I would rather be back at the side I wanted to be on rather than have to conspicuously stroll across again). I stopped for a brief moment at the other end, psyching myself up, and warning an old lady that I wasn’t about to jump, and then I just went for it.

The climb is steep at first, and the smooth surface meant that, after I’d lost the momentum from my run-up, I had to use my hands to stop myself from slipping back down. After a bit, though, the slope is gentle enough that you can run normally. At this point, the birds on the bridge had realised that something was occurring, and all at once they took off. I powered on, and there was me, running the wrong way up a fucking bridge, birds flying everywhere around me, squawking. I was almost at the top, so I slowed to a stroll so that I could take everything in. The birds were gone, and it was quiet, and I looked down at the people sitting by the river, hundreds of them, just chilling on a sunny evening, watching the sunset. I saw a flash. Somebody was taking a photo of something.

At the highest point, I stopped. I was literally on top of the city. On top of my whole world. I put my hands in the air and stood for a few seconds, eyes closed, in the victory stance. When I opened my eyes, it looked like everybody in Maastricht was taking photos. All along the banks of the river, as far as I could see, was flash after flash after flash. I didn’t even realise at first that they were taking photos of me, until I thought about how crazy it must look from down there to see a girl standing, arms spread, on top of the bridge arch like a loon. They probably thought I was going to jump or something. I stopped posing, and stared at the scene, laughing out loud to myself in the privacy of my own creation at the absurdity of the whole moment.

Like all perfect moments, though, it had to end. Quickly too, if I was going to avoid being arrested upon my arrival back on solid ground. I took off running again, glad, at least, to be finally going downhill. By the time I got to the steep part, I was going too fast to stop and control my descent, so I just let my feet slip out in front of me, plonked down on my arse, and slid the rest of the way to the bottom. As soon as I’d jumped off the end back on to the footpath, someone started clapping. As I ran past him, trying to get as much distance between myself and the bridge as possible, he shouted something that sounded like “that was awesome!” I shouted thanks back at him, which he probably didn’t hear, and sprinted back to the crowds of people by the river. My friends were right where I’d left them, looking at me like I was crazy, but none of them very surprised. I asked them if it had looked good from where they were. They didn’t need to answer, they just showed me their phones. 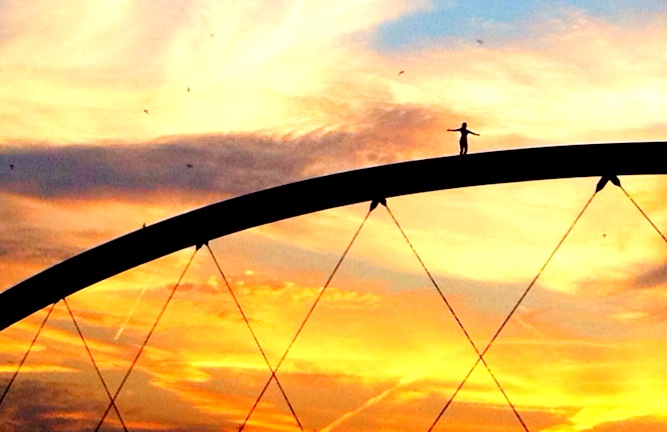 The photos were amazing, but even without them, I knew I’d have the image of the view from the top of that bridge, and the flashbulbs of the masses below, imprinted on my brain for the rest of my life. Sometimes people do stupid things when they give in to spontaneous urges, but sometimes those stupid things just happen to be the best damn thing they’ve ever done.

One thought on “Girl on Top (of the city)”