In my 10 months in Maastricht so far, I seemed to have garnered quite a reputation for my frivolity skills. This was confirmed last week when I received the coveted “Party Animal” award at the final International piss-up. Then, like it does every year, my birthday came around and, having a lot to prove with my new title and all (and also just generally because I love throwing the occasional shindig), I thought it would be mighty inappropriate if I didn’t throw the biggest and bestest party I possibly could.

I had started thinking about this months before the event. A small mishap at our go-to venue meant that I was struggling to think of somewhere I could host it, then it occurred to me. I live in the perfect place. If I take all the furniture from my room and put it on the mezzanine, my place is basically one big empty dance-floor. That probably wasn’t going to be big enough for everybody, though, so I had this genius plan where I coordinated with Amber, my next-door neighbour, and informed my other landing-mates that I would be taking over the landing space too (in the end we took over the stairwell too… and the entrance hall… and the garden).

I invited about 100 people on facebook, and most of them said they were coming. Perfect. I also at some point decided that the there was going to be a 90s theme, because if living in the home of Eurodance taught me anything it’s that if there’s one type of music that can keep 20-somethings dancing past 5am it’s 90s dance. Right, lets go!

Ok, so first we need some juice. (obviously it’s BYOB but this is just for the house. Cause that’s what being a good host is all about). 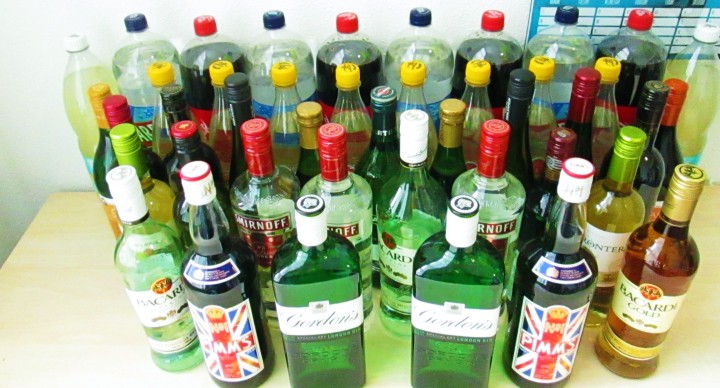 Not wanting to blow my own trumpet or anything, but I planned everything pretty damn perfectly. I put orange, red and yellow plastic bags over the cold fluorescent light fixtures in my room and in the hallway to give some atmosphere, I turned my bookshelf into a bench, the ironing board into a table, put my dining table outside so people could party outside if they wished, brought buckets and ladels for punch, made 100s of super-strong vodka gummy bears, and made the best goddamn 90s dance playlist you ever did hear. Now all we need is some bodies. 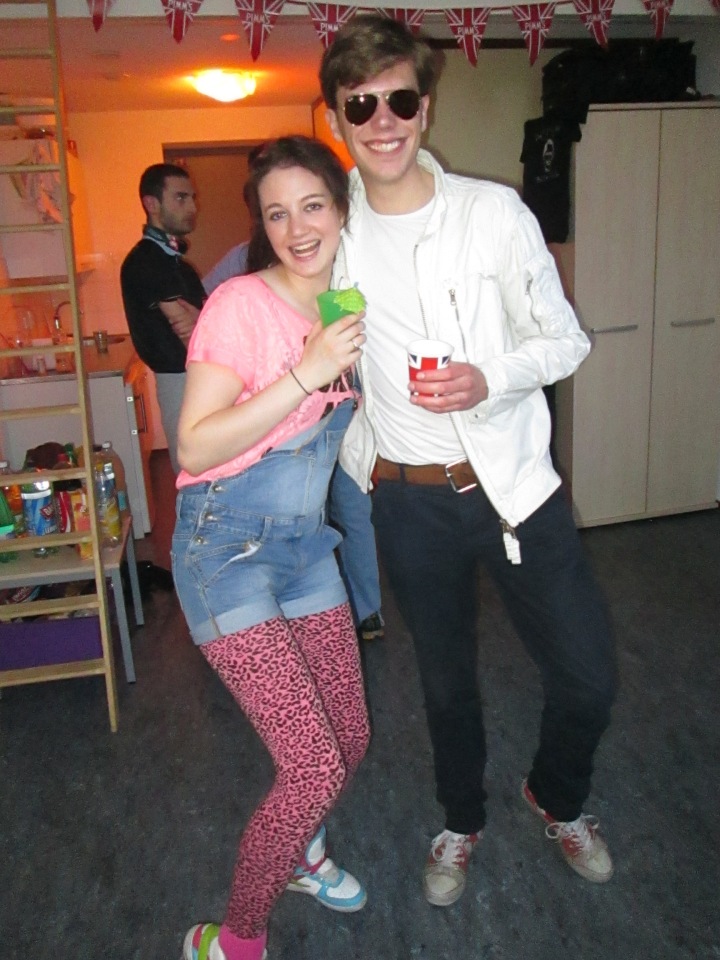 Bodies? CHECK. God, did we get some bodies. 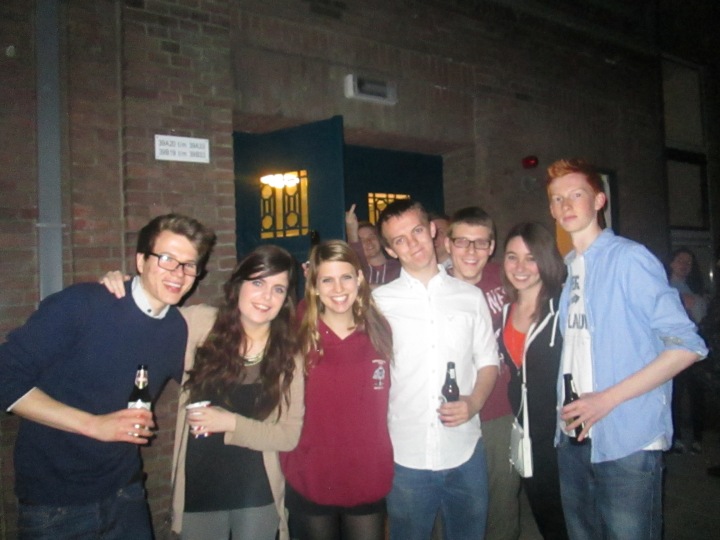 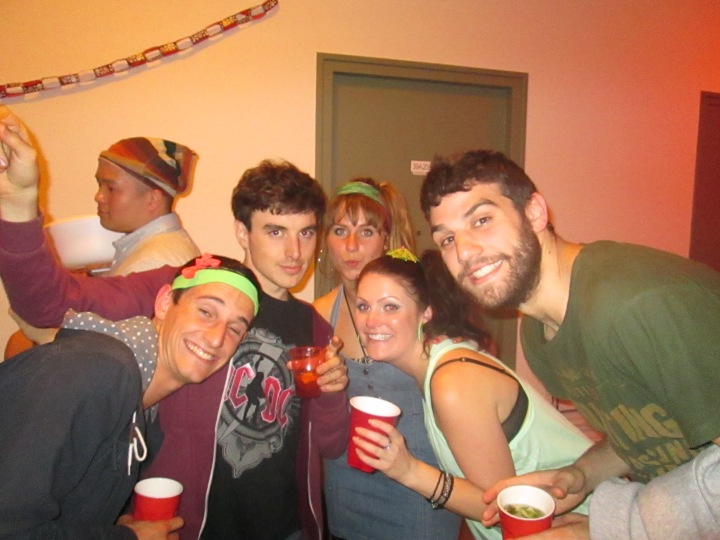 And somebody brought a plant. Without a pot. 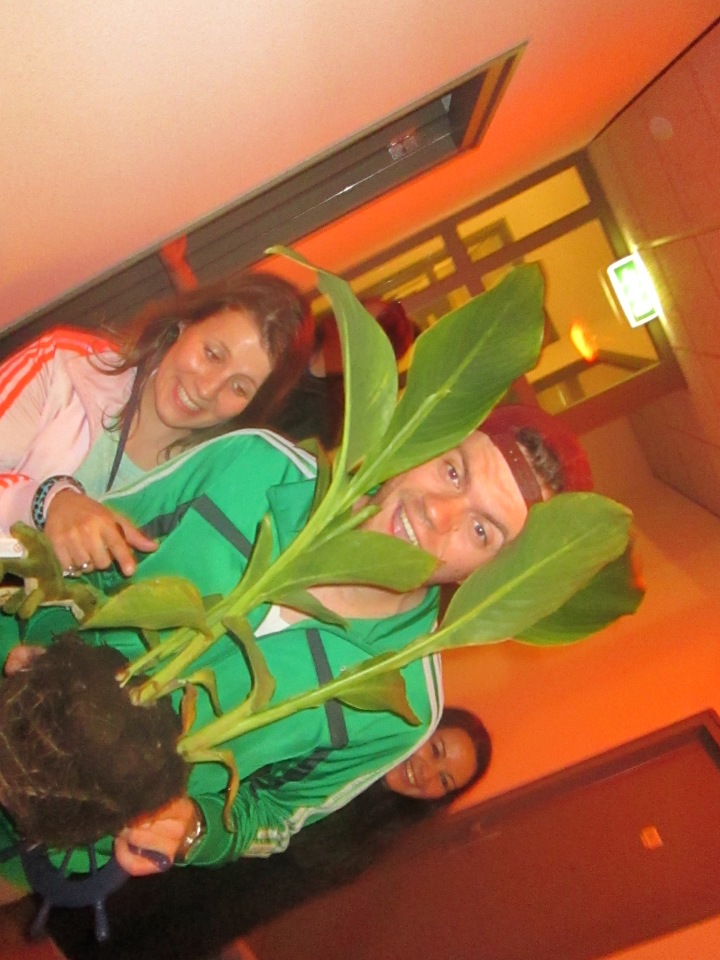 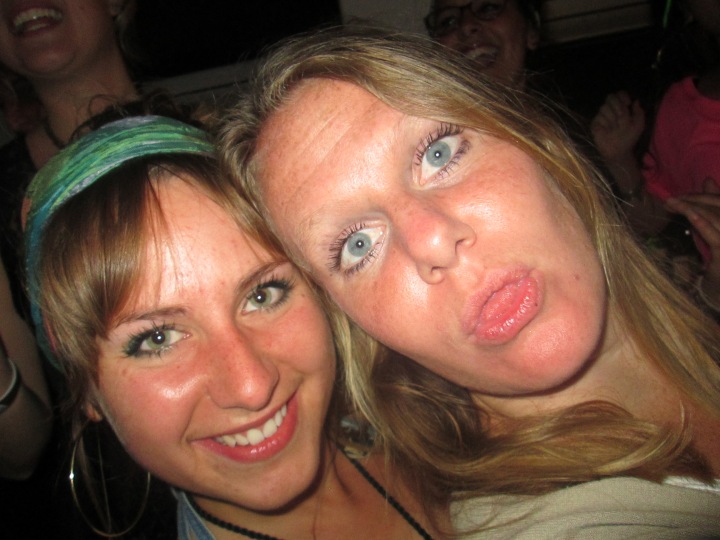 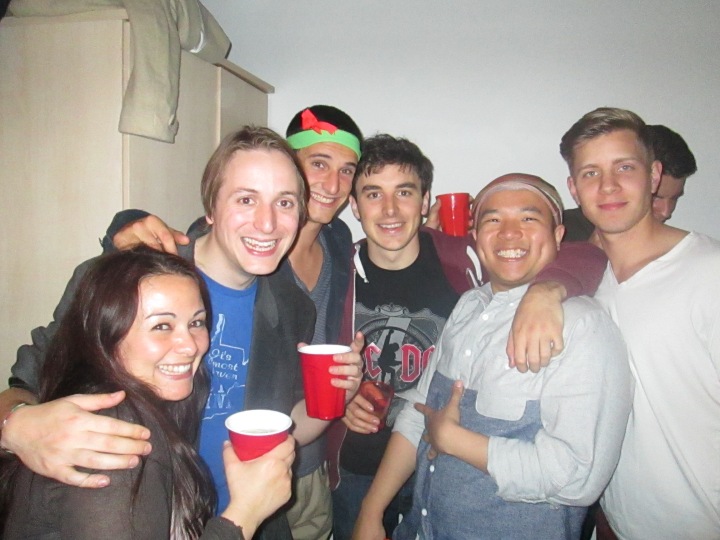 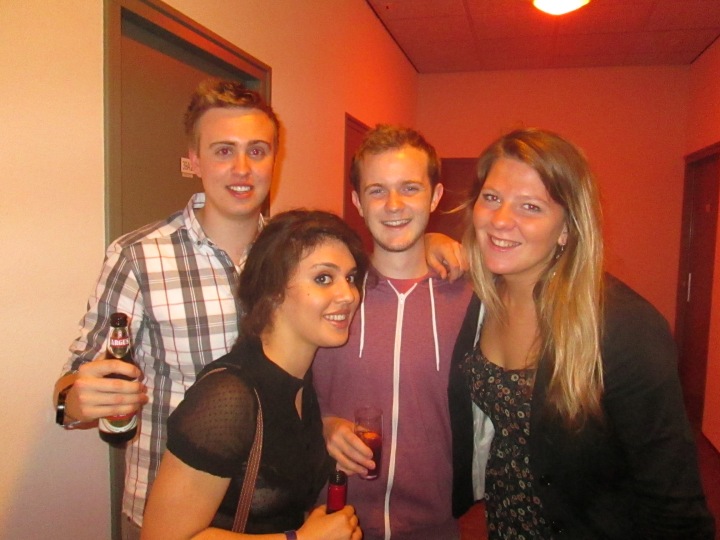 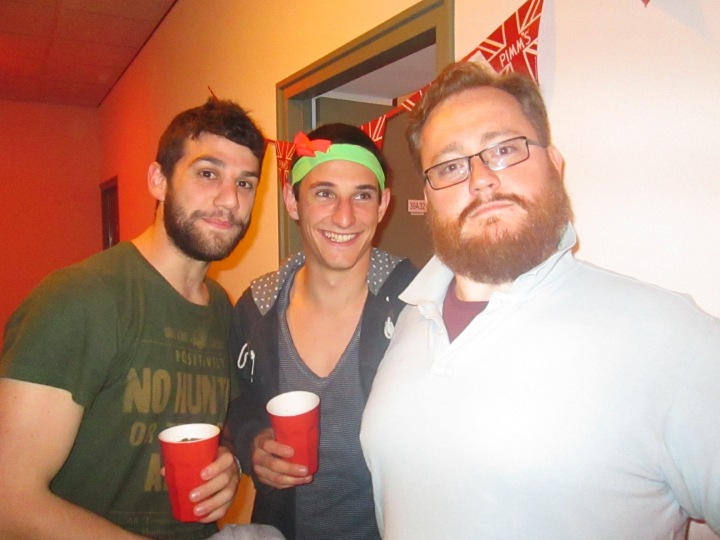 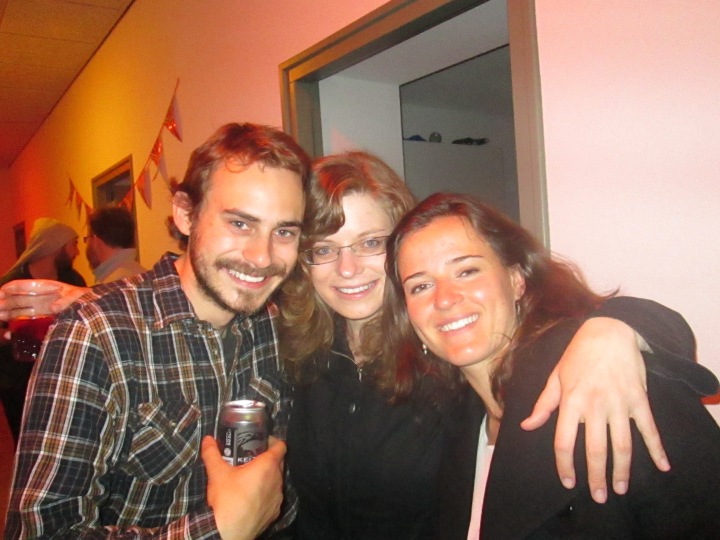 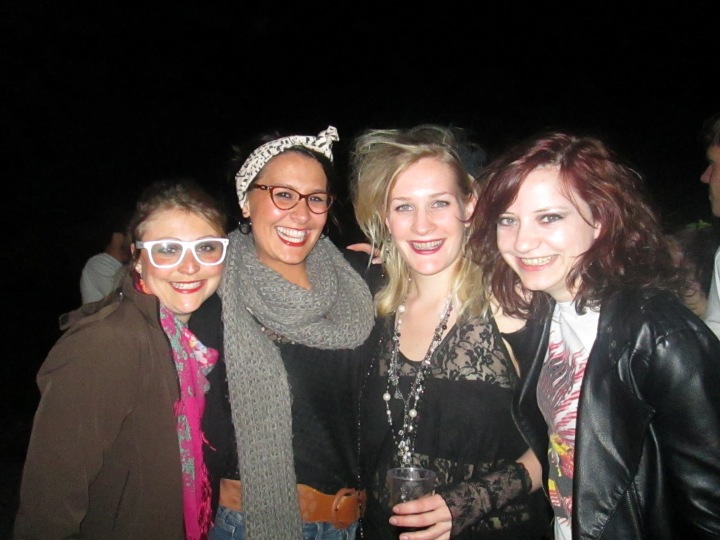 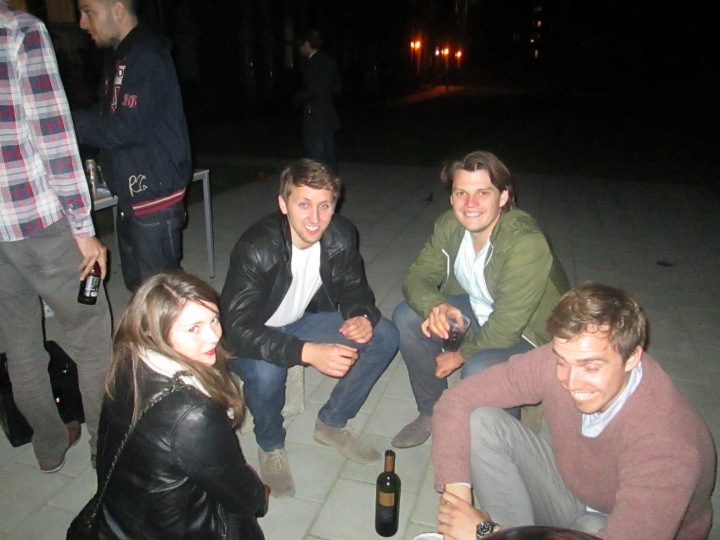 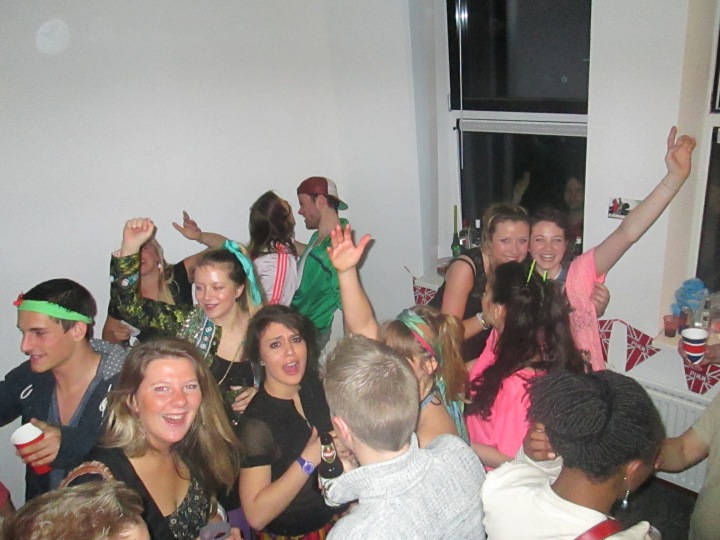 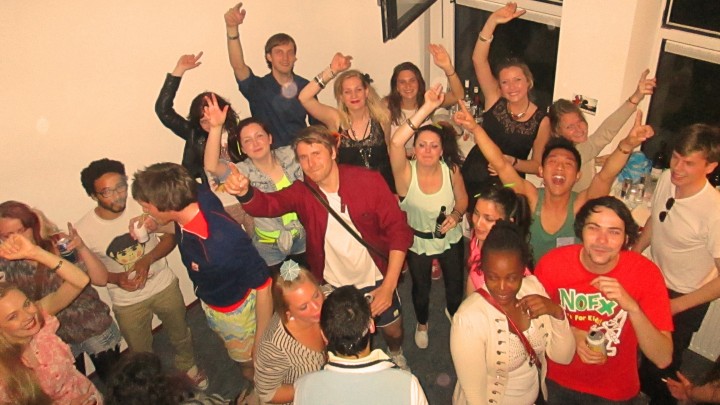 And then my camera ran out of memory. Also, I think we were now past the point of taking pictures and concentrating fully on the gin and the dancing. This is sad, because we never really captured the magnitude of the party. people kept coming and coming, people I knew, people I barely knew, people I didn’t know but who knew people I knew, and people nobody knew but had “heard there was a sweet party going on”.

I swear to god at its peak there must have been close to 300 people here, in my room, in the entrance and stairwell of my building, in the garden… everywhere.It is a miracle of unfathomable magnitude that the police weren’t called because we must have been insanely loud.

…and somehow the hoover ended up in the garden and completely destroyed.

And OH my GOD the mess afterwards!

But a day of hungover cleaning later, and we were good as new. Plus flowers!

It truly was an unforgettable night, I am so grateful to everybody for coming.. those I invited… and those I didn’t! When 300 people turn up to your birthday party, dance like maniacs till 6am, drink their bodyweight in alcohol, and nobody gets arrested you know you’ve got a bunch of friends worth keeping.

Remember, vacuum cleaners are replaceable, memories are not.

Thank you! and I LOVE YOU ALL.