This airport can drive people to tears at the best of times, so you’d forgive a girl for shedding one or two as she says a final farewell to the city she’s called home for the last 55 weeks. But, as the two main men in my life dropped me at departures, I somehow managed to maintain some sort of facial control, and even crack a smile for one last selfie.

This was even more of a feat when you take into account the hangover that was lingering from my last huzzah the night before. How on earth did I manage it, you ask? Well, the only thing that can even almost counteract the sadness that comes with an era coming to a close, is the prospect of going somewhere new and exciting. Imminently. Where am I off to, you ask? NoLa. Crisis averted.

Shortly after touching down at Louis Armstrong International Airport, the cabin stewardess announces “Come on down, y’all are good” which turns out to be New Orleans speak for “the stairs are attached and you may now disembark the aircraft”.  After coming on down, collecting my obnoxiously overweight bag, and deciding not to mess with public transport, a reasonably priced taxi drops me off outside my wee hotel in the French Quarter. The hotel is super cute. It’s called the Inn on St Peter and is quintessential New Orleans in just about every way. I was very excited when the lady at the desk told me I had a room on the balcony, even if that meant lugging over 100lbs of luggage all the way up there. The petite French doors opening from my room directly on to the classic New Orleans style balcony where I had my own little outside table and chair was totally worth almost dying on the narrow metal staircase, and the view was pretty nice too.

It was already pretty late by the time I’d got settled and freshened up but, as tired (and still hungover) as I was, I was more excited to get a taste what New Orleans had to offer, so I set off down the road. Turns out my hotel was reeaally close to Bourbon Street, which seems to be the nightlife epicenter of the entire South, and I could hear the music and the voices pretty much as soon as I left the building. I followed my ears. On the way, I saw this truly terrifying feat of Halloween decorating: 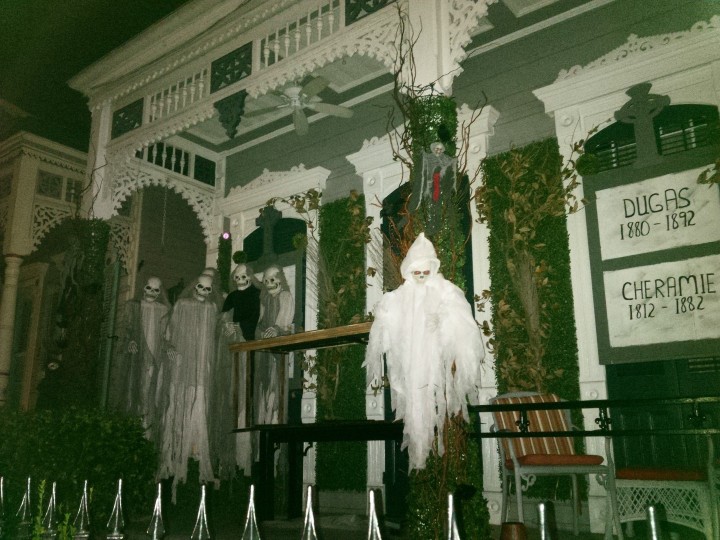 It’s not long before you come to where it’s all occurring. The intersection of Bourbon and St. Peter is buzzing. It’s like 9:30 on a Tuesday, and already there’s more going on than at peak Friday night in Aberdeen. The streets are filled, everybody has a drink (in New Orleans most bars let you bring in drinks that have been bought in other bars, so everybody’s just wandering around with plastic cups full of alcohol), and there’s music blasting from the open doors of packed bars. 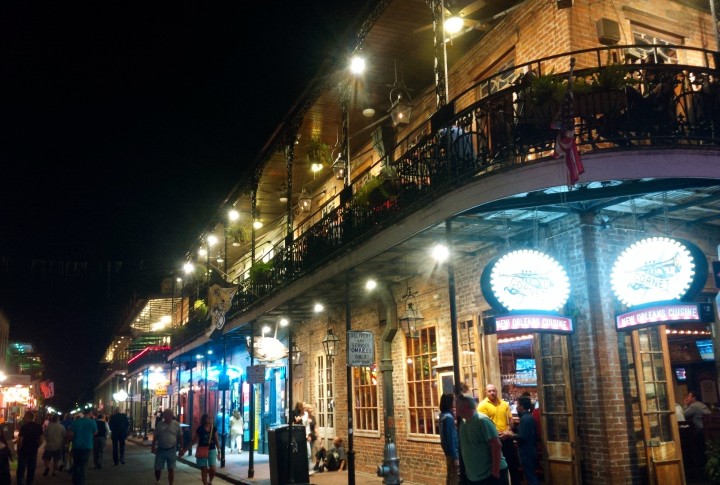 I made a mental note to try the “hand grenade” beverage that many of the establishments were boasting about, but right now, I was looking for one thing only: something fried.

The sign in Willie’s Chicken Shack looked legit.  I was, after all, looking for the real New Orleans.

The dude at the counter recommended the southern fried catfish, and I took his advice. The meal came with spicy fries and the best (American) biscuit I have ever had. It. Hit. The. Spot. 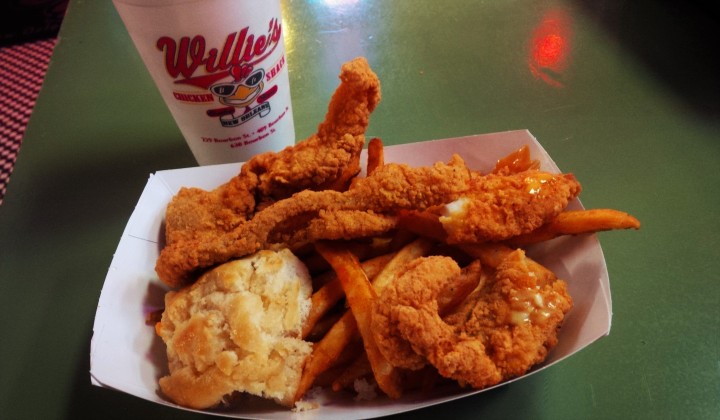 Hangover finally gone thanks to good ol’ Willie, I had another wee wander around the immediate area, watching all the drunk people having a jolly good time, then went back to my hotel and slept like a baby.

After a balcony coffee in the glorious southern sunshine and a spot of Faulkner (who wrote some of his best work in New Orleans), I headed off to explore what the French Quarter had to offer. Quite a lot, it transpired. I mean, look at the ferns on these bloomin’ balconies for a start!

The main square in the city takes its name from Andrew Jackson. There is a large park in the middle, with a nice statue of the Major General (soon to be President) himself:

At one end is Saint Louis Cathedral,  the seat of the Roman Catholic Archdiocese of New Orleans and one of the oldest cathedrals in the US…

… and at the opposite end is a splendid view out over America’s favourite river. The great Mississippi. I took a wee trip down the bank and walked along the river sandmud. I call it this because it is kind of like sand, but also like mud. 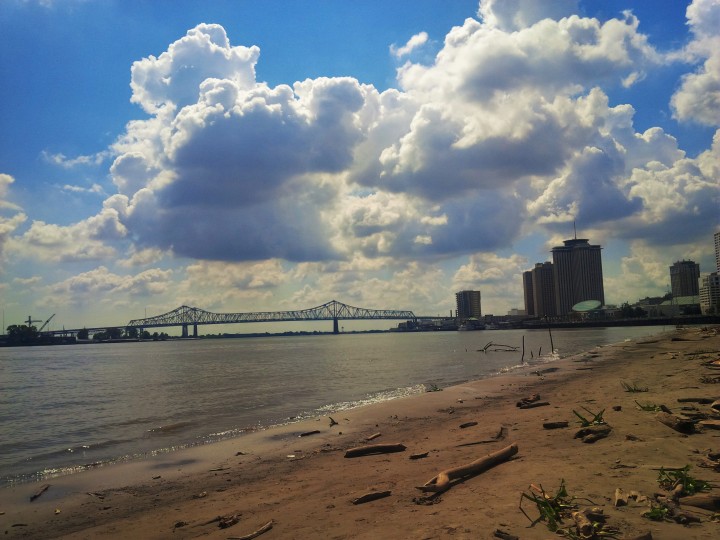 All this sandmud walking was making me hungry by this time, so I figured it was about time to climb out of the river and go in search of some more of that Southern cookin’. I found A nice restaurant back at the intersection of Bourbon and St. Peter that served a bunch of things that were on my “things to eat in New Orleans” list. I sat down at the bar, and ordered a beer and some food before getting chatting to a chap from Kent who apparently had a house in Daytona Beach and a son who was a “real actor”. Joyously, my food came promptly and I spent the rest of the time stuffing my face with jambalaya and and alligator sausage po boy and not talking to anybody.

I then walked up to the  Tremé neighbourhood and took a stroll through Armstrong Park, named after legendary jazz musician Louis Armstrong who was born in the city. The park is kind of strange in an almost-falsely idyllic sort of way. There were a lot of artificial ponds and cute bridges, and grass and trees, and ducks and statues. I quite liked it.

From there I went East until I hit Canal Street. Canal Street is probably New Orleans’s major thoroughfare, and I’ve read that apparently it’s the widest roadway in America still to be called called a street, instead of boulevard or avenue. It is indeed wide, there are a lot of palm trees, and it is here that I first see the cutesey little street cars that so inspired Tennessee Williams.

I spend about an hour walking around the CBD neighbourhod. On the recommendation of my guide book, I visit the Jesuit Church of Immaculate Conception. Since I try, as a general rule, to avoid conceptions of all kinds, I didn’t venture in. It was, however, a nice building to look at from the safety of the pavement. 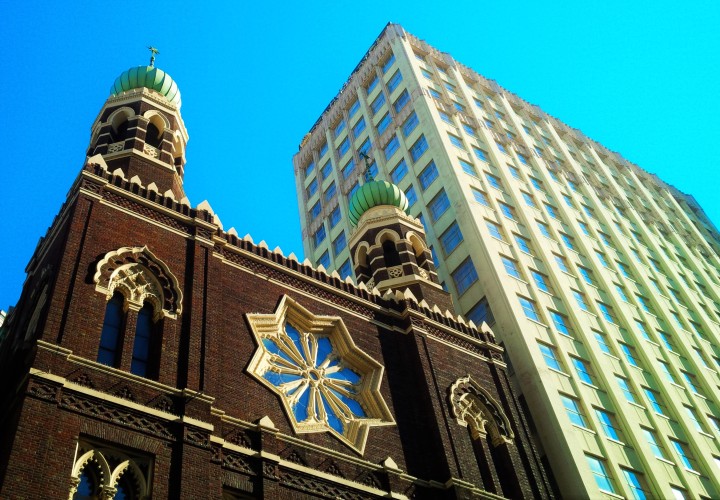 That evening, I decide to see what NoLa’s famous nightlife can offer me. It will surprise many of you, but I’ve never actually gone on a ‘night out’ alone before, so it was not without apprehension that I donned my bestest leggings and headed down to Bourbon Street. Being a pirate enthusiast, I was naturally drawn towards an establishment called the Funky Pirate, and was pleased to discover that they offered both of the things I was looking for: live jazz and a hand grenade (also the Cubs game was on which made me nostalgically happy).

After a couple of hours in the Funky Pirate talking to some nice old people from Liverpool (can I not go anywhere without meeting the English?), I was definitely feeling the hand grenade, and excited to see what else was going on in this town. Next door was a bar called Fritzel’s, which, according to my guide book, was the oldest jazz club in the city. They seated me at the bar beside a nice local man called Allen. The Jazz was strong and so were the cocktails. I went for a hurricane. Because we’re in New Orleans.

He said that he actually doesn’t get out much… that this was kind of a one-off, and since it was my first night out in New Orleans, we decided that we would go have a blast. This is Allen.

We went to a bunch of bars, including a lovely place called the Three-legged Dog (which boasts opening hours of 00:00 to 23:00). For somebody who doesn’t go out much this guy had a lot of friends, and we met somebody he knew in every place we went into. Before we knew it it was 4am, and we’d drunk many more hand grenades than the surgeon general would have approved of.

The good thing about hanging out with locals is that they know where you can get the best pizza at four in the morning. After a couple of huge slices, I decided to call it a night, and the gent that he was walked me right up to my hotel and bid me farewell, before (naturally) finding some of his friends in the bar across the street, and joining them for more drinks. So, thanks Allen, for showing me a real New Orleans night out!

Bring on the hangover…