Hangover pretty much gone after a morning of idyllic lounging at the house (And more pancakes. Pancakes can sort out anything) , it was time to head out down to the Yacht Club where Colleen’s dad keeps his boat.

I’m pretty excited. You know (If you’ve read my other posts) how much I love good boat!

We did all of the pre-trip checks (I don’t know the terminology). I was given the job of hooking a rope over a hook using a long pole, and failed spectacularly because I seemingly completely lack the ability to use lengthy tools for fiddly tasks. Not to worry. It was apparently not important anyway.

Then we were off. What I hadn’t realised was that the town of Erie itself is actually on a sort of mini-lake, separated by a spit from the rest of Lake Erie. I should really have realised this because Lake Erie is effing huge, and I could see the other side from where we were kyaking, but for some reason it failed to register. I though maybe we were just at one, narrow end!

So we sailed (I say sailed, it was a motor-boat) out of the yacht club, and headed out in the direction of downtown Erie. Just sittin’ on top, chillin’.

We went past downtown, keeping close enough to the shore to have a good nosey at what was going on! This is the port/hotel/conference center or something like that. 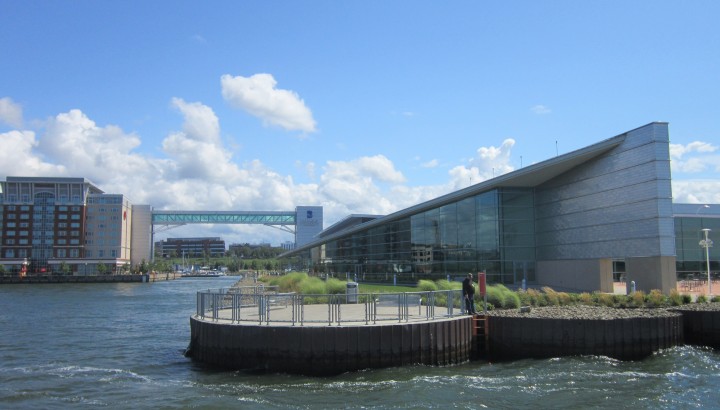 And then we were off, through the narrow passage at the end of the inner lake and out into the open of Lake Erie itself. Now Lake Erie is BIG. Although the smallest of the Great Lakes of North America, she is the 10th biggest lake in the world at 250 miles long and almost 60 miles wide. You might as well be at sea. I pretended we were anyway.

Her outflow also goes over Niagara Falls and into Canada, so I was hoping we weren’t going to run of of fuel and end up experiencing that. I didn’t bring my passport.

We puttered about the lake at full speed, with the fresh breeze in our faces, then turned back towards Erie, where we re-entered the inner lake with its calm, warm waters, and had some sandwiches and drinks by the edge of the spit beside a seagully beach. 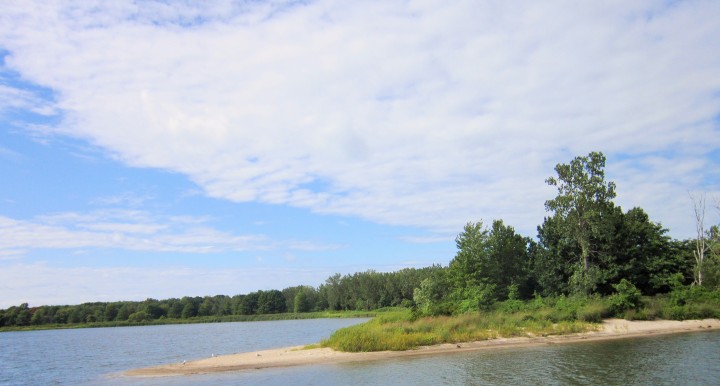 And said HIYA to some other boaters, while debating whether or not just to jump fully clothed into the lake. The water was actually warm… but I was low on clothed by this point so we resisted the temptation.

After an hour or so of placid drifting, we called it a day and went back to the yacht club, where we hosed down the boat and drove the short drive back to the house.

The day’s not over yet though! It’s my last full day here so we’re gonna squeeze out every last drop of activity! Turns out Colleen’s dad also has a 1930s station wagon. Called Woody. cause a lot of it is made of wood (Also that’s what Ford called it). Obviously I was keen to go for a ride in this thing, so we grabbed the dog and fired up the engine.

And WHAT a sound! Like actual chitty-chitty bang bang style chooffing. We drove/chugged all the way down Presque Isle spit, wind in our faces, me riding shotgun, Colleen and the dog in the back bench. Glorious! 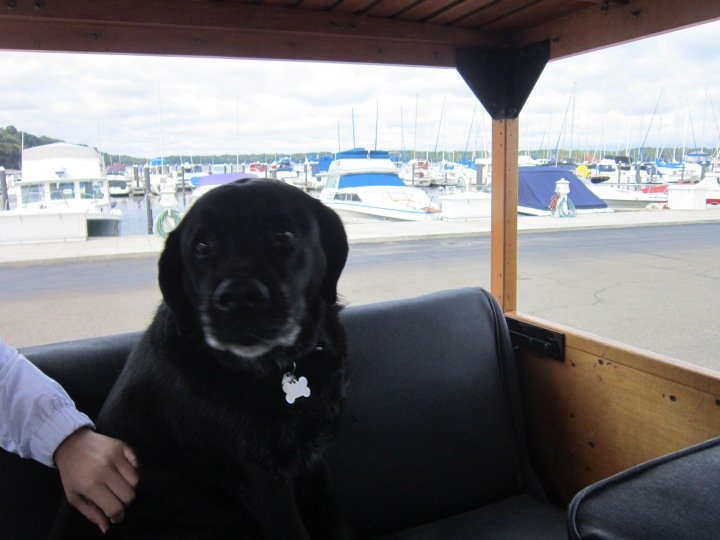 Then we went to local tap house U Pick 6 for a final meal and a couple of  good beers, and now we’re sitting in the Conservatory watching the sun go down over the lake. The weather’s closing in and there’s supposed to be a thunderstorm tonight. Fingers crossed, because this is the perfect place to watch a thunderstorm!

My visit to Erie couldn’t have been better. Colleen’s family made me feel like one of them from the moment I got there, and despite the many years we hadn’t seen each other for, Colleen and I slotted right back into being friends as if it was just last week that we were playing Lego in my parent’s bedroom after school in 1996.

Erie is probably one of the most perfect towns in the world. In the sense that it has everything. Sure, it’s probably pretty expensive to live there, but it’s probably worth it! The town’s a decent size and the night life is good, but it still has that small-town local vibe. The lake is beautiful, there’s a theme park, old school diners and, to top it off there’s also a pirate ship! What else could you actually want? For my 3-night stay, at least Nothing! 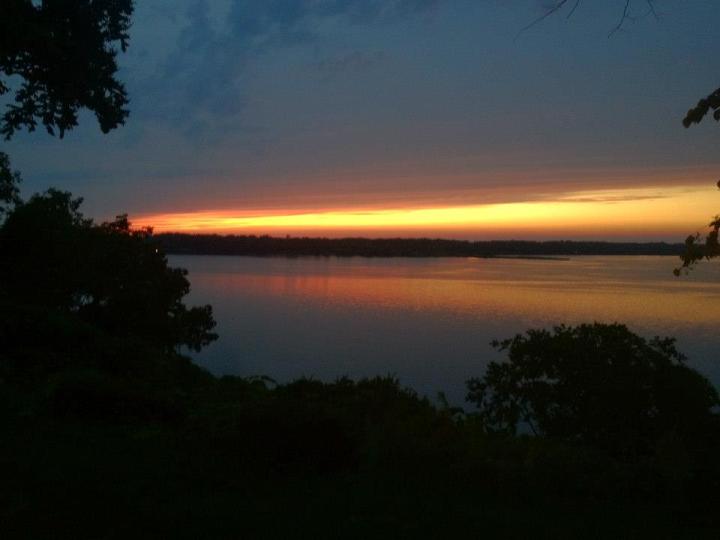 EDIT: There was a thunderstorm, and it was epic. Trip officially complete!

THANKS ERIE!! and THANKS to the McDonald family for being perfect hosts!