Our handy map has told us that not far from Vienna lies another European capital city just waiting to be explored. Bratislava, Slovakia lies just 50 miles east of here, which sounds to me like perfect day-trip material. Plus we get to go on an Austrian train, which I hear are quite efficient. Yaay!

Disembarking at Bratislava Hlavná Stanica, the main train station, it was a short and scenic walk to the centre of town. First impressions of this new city are good ones – The streets are quite Parisian-looking, with wide roads, intricate building façades, and iron balconies. 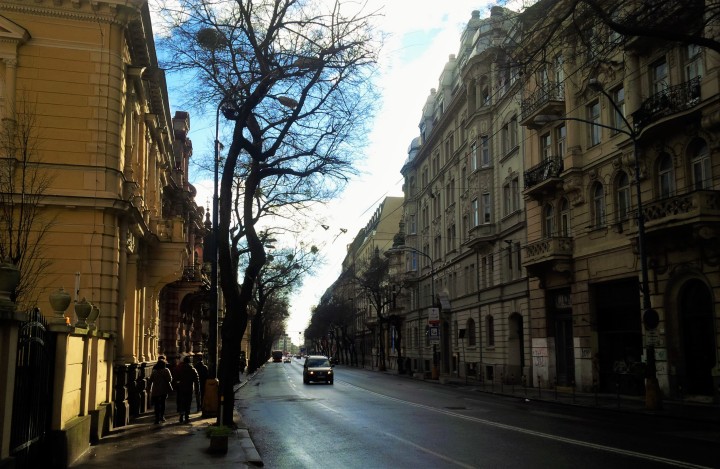 We have booked a late lunch in some fancy restaurant this afternoon, but that’s not going to stop us from also enjoying lunch in a traditional wee Slovakian tavern first. We’ll call it a bonus lunch. These fancy restaurants always have tiny portions anyway, so we might as well get some proper calories in first. The taverny place was called 1. Slovenská Krčma, and was pretty much straight out of a scene in an Eastern European film. There’s several different rooms, each with a different theme but all in-keeping with historic Slovak design. Super quaint. 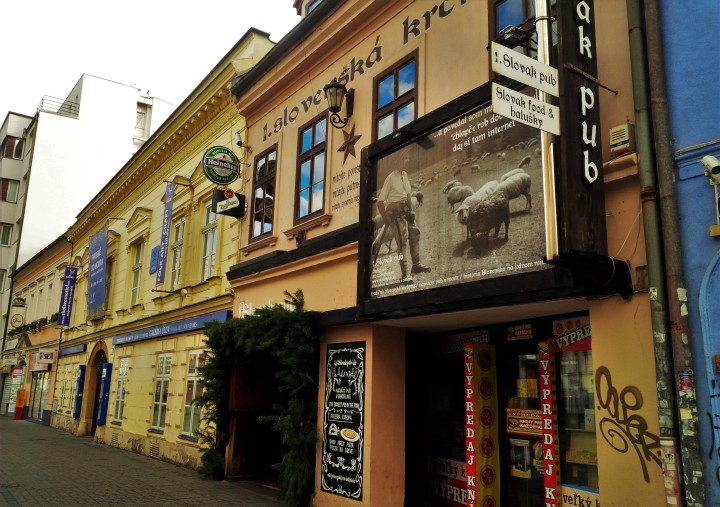 There were cute checked tablecloths and a fine selection of local beer, straight from their own cask cellar, which came in at around €1.50 for a pint. The menu was also vast – full of meaty, carbolicious dishes and about 83 different types of pierogi. The prices were insane – a whole plate of filled with dumplings was only €4.50, and you could get a large bowl of traditional Slovakian sausage soup for €1.90. What IS this place? It tasted amazing, too, and we could definitely have sat there stuffing our faces with potatoes in various forms all day. 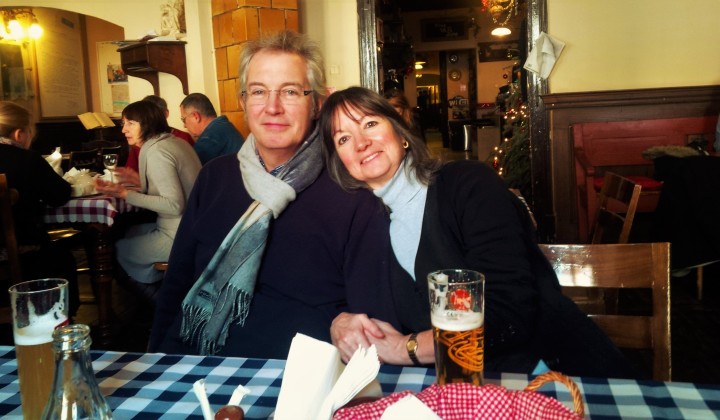 But we couldn’t sit there all day. We had things to see, and a lot of walking to do if we’re going to burn off any of those carbs in time for our second lunch! First, we saw these interesting  slash slightly creepy statues: 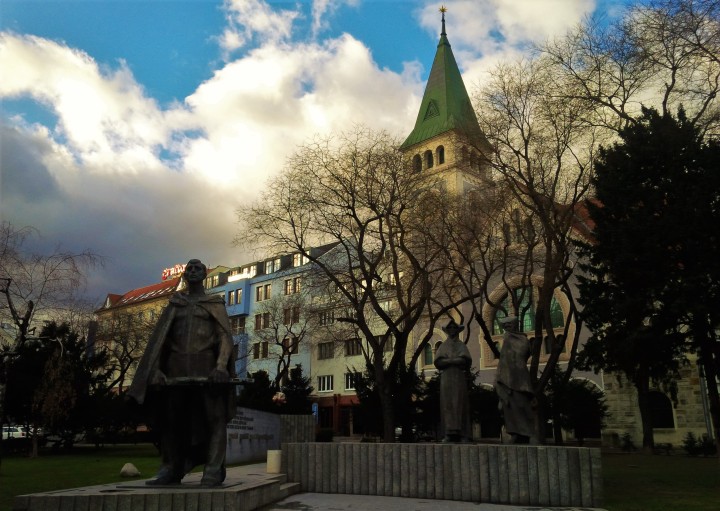 This clock tower, is the top half of St Michael’s gate, which is one of the only preserved sections of the medieval fortifications that once surrounded the city. The tower is actually like eight storeys tall, and at the bottom there’s an archway that you go through to get to the original part of the town. 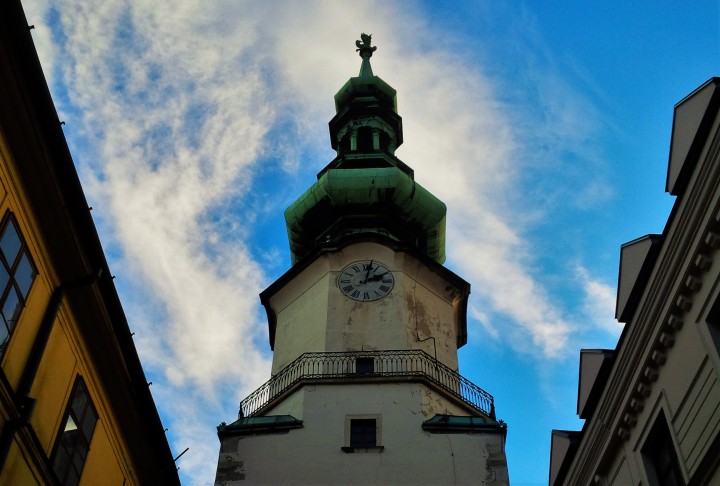 The old town centre is all nice wee cobbled pavements and narrow streets, and vodka bars that just look like the front door into somebody’s house (and where a vodka is also like 90 cents). 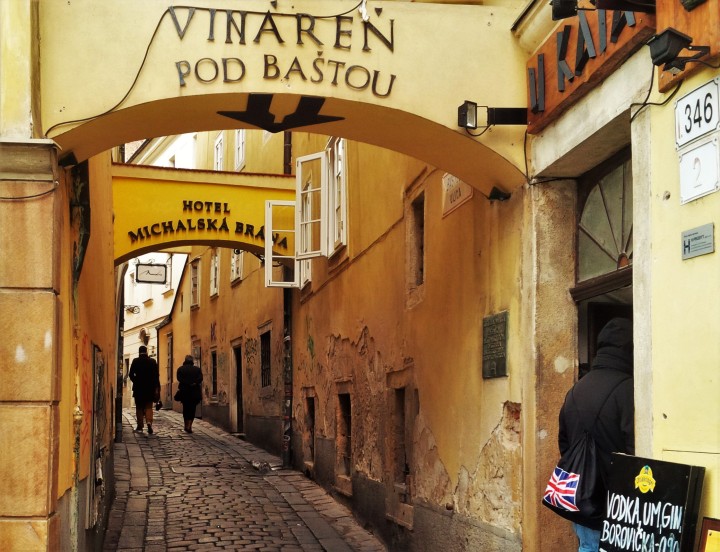 We took a jaunt past the cathedral, which has a nice red pitched roof and a pretty steeple like in them paintings you see in art galleries and stuff. 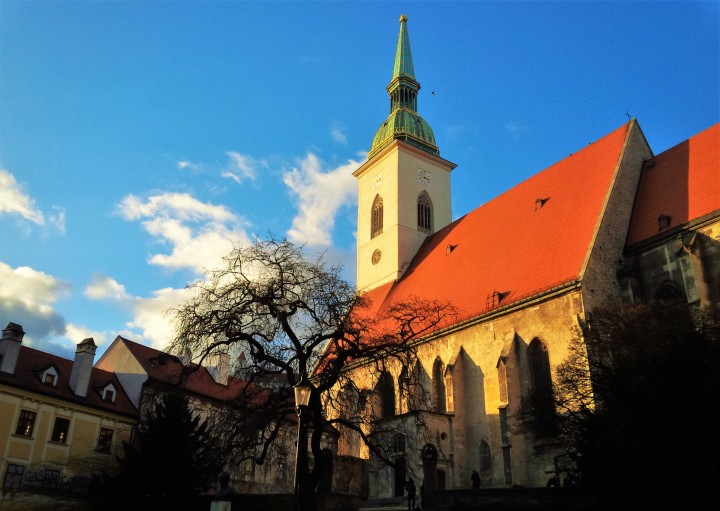 There is also a castle in Bratislava, and like all good castles it sits on a big-ass hill. Luckily, there’s a pretty staircase leading up the hill… 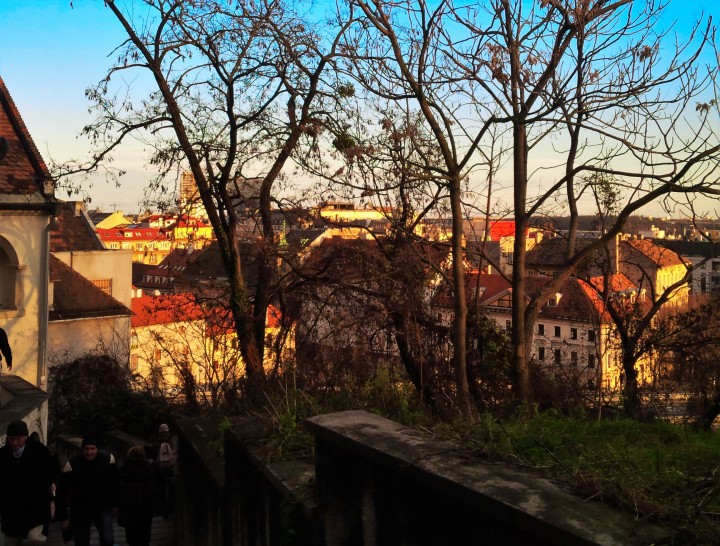 …many stairs later, we arrive at one of the towers that make up the corners of the outer fortress. The views over the city are very nice indeed. We didn’t go inside, because we have a reservation for our second lunch fairly soon, and need to get there first. 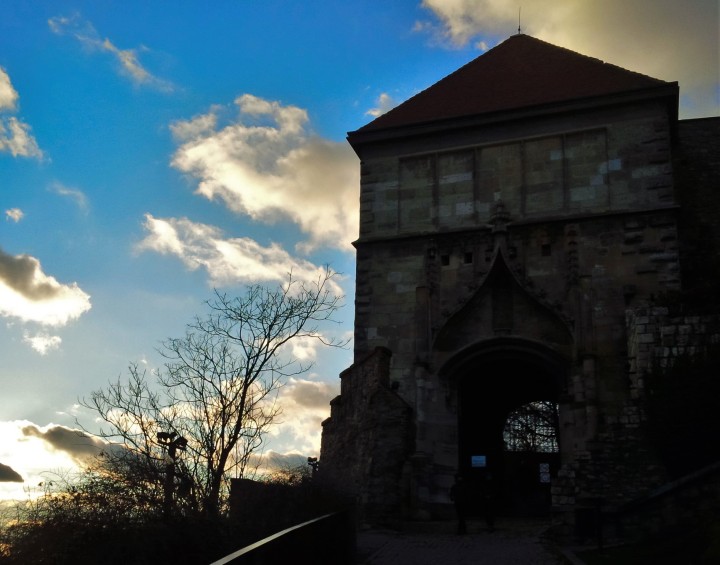 Speaking of… from the top of the hill we can see the restaurant that we’re going to. Yes, the one on the top of that there bridge that looks like a UFO.

Funnily enough, it is called the UFO Restaurant. Yes, it’s clearly gimmicky – but we do like a good gimmick every now and then. It also apparently has spectacular views of the city, and top-notch food, so what’s not to like really. Check out that view! I could enjoy eating a McDonald’s facing this, so I think we’ll be just fine with whatever gastronomical delights their Michelin starred chef can whip up for us.

I went for the four-course tasting platter, and every part of it was delicious and beautifully presented.  I also had a fantastic cocktail called a Kee Wee. Fine, I had two. The waiter was friendly and helpful, and generally the place was very pleasant, if a little wobbly in the January wind. 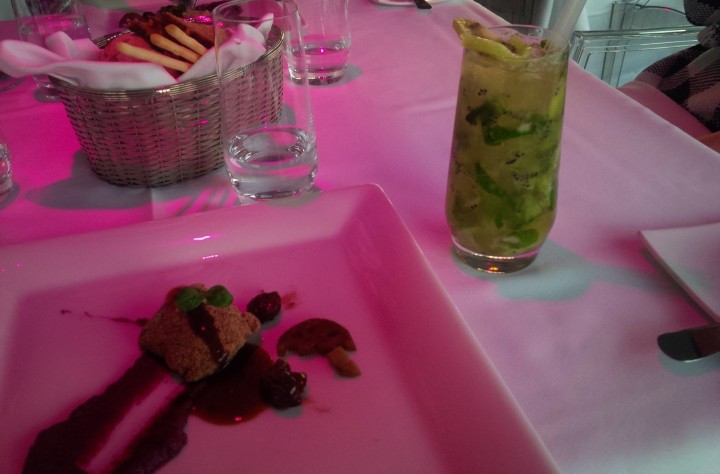 I won’t show you photos of all the other courses, but the dessert was fun because it came with a paint tube full of raspberry coulis, and who doesn’t enjoy that?

As the sun went down, the city lights came in and it was all very enchanting. If you’re even in Bratislava and you don’t have a phobia of heights, I’d definitely recommend this place. For a “gimmick” restaurant, the food is fantastic, and the views are first class. Yes, it’s pretty pricey, but you get what you pay for, and we had a jolly good time. 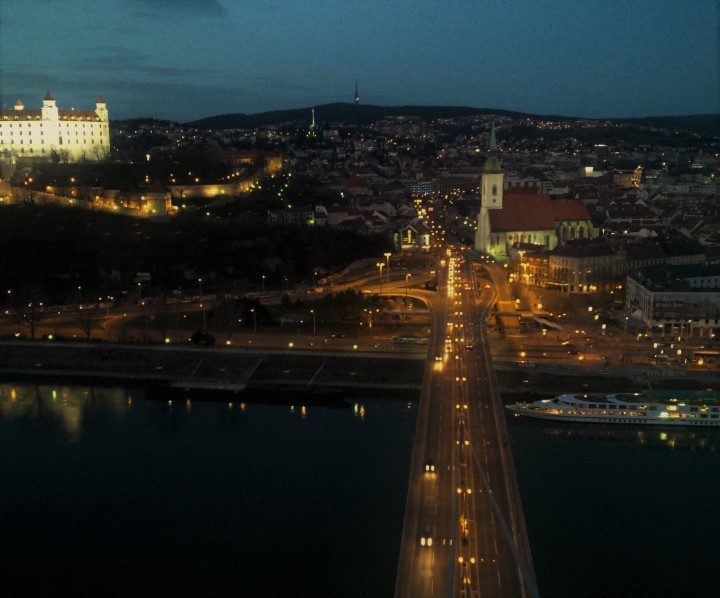 All that was left of our day trip, then, was to walk back through the city at night, and hop on to a Vienna-bound train. We popped into the Cathedral for a second on the way. Because Christmas trees. 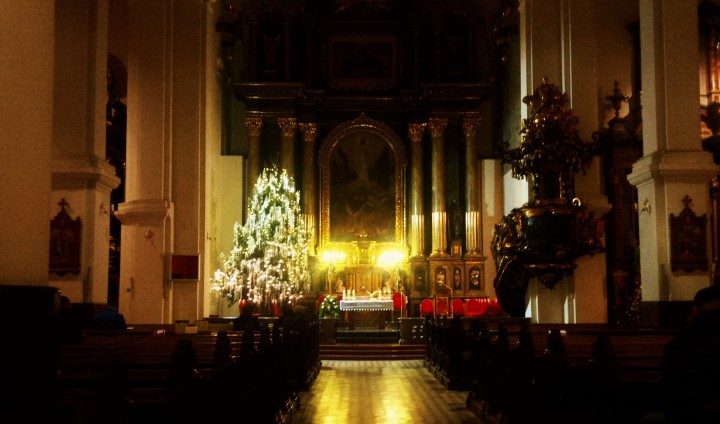 And that, dear readers, was Bratislava in a day. You should try it some time.