The first time I visited Chicago it was December. It was 2008, it was cold, it was windy… And it was just about as close to a Christmas paradise as I had ever seen (there’s a reason they set Home Alone there).

The thought of getting to spend a WHOLE DECEMBER in this festive city was potentially one of the bonus factors that pushed me towards taking a job here, so after getting all that Halloween and Thanksgiving malarkey out of the way, I was counting down the days until Chicago got its Christmas on. The following blog post will be mostly photographic evidence of how much fun it is to be in Chicago in the month of December:

As with any festive tour, it would be improper not to start at the Christmas market… and Chicago’s happens to be the largest in the United States. It all goes down in Daley Plaza (which you may know from the film The Blues Brothers), and they call it the Christkindlmarket, after the great Christkindlesmarkt in Nuremberg, Germany. 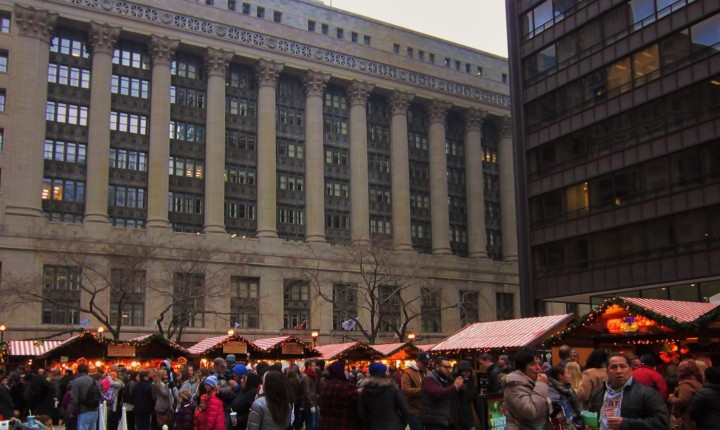 There is a very large Christmas tree in the middle of the market, surrounded by all the classic festive stalls selling giant sausages, glühwein, and everything in between, all set against the lovely backdrop of Chicago’s architecture. 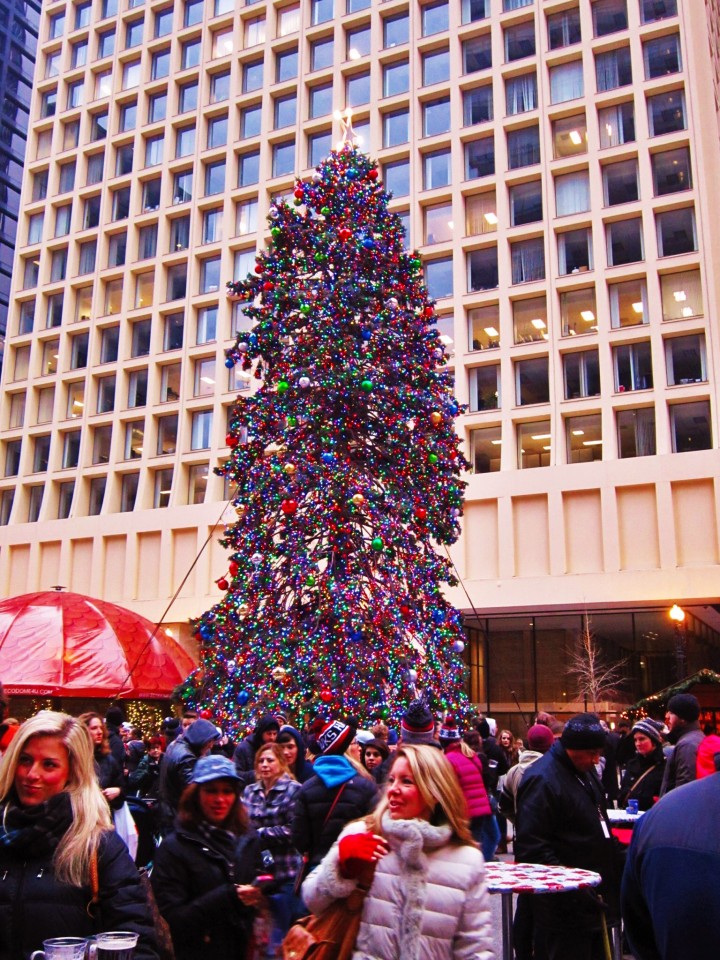 Ice skating – everybody loves ice skating! The Christmas ice rink in Millennium Park looks delightful sitting under the Bean sculpture, surrounded by sparkly Chicago skyscrapers all decked out with subtle red and green trim. Rockefeller Plaza eat your heart out…

…And they’ve not done a bad job with the surrounding trees on Michigan Avenue either.

In fact, I don’t think there’s a tree in Chicago that hasn’t been given a festive makeover for the month of December.

There are these ones at Madison and Dearborn: 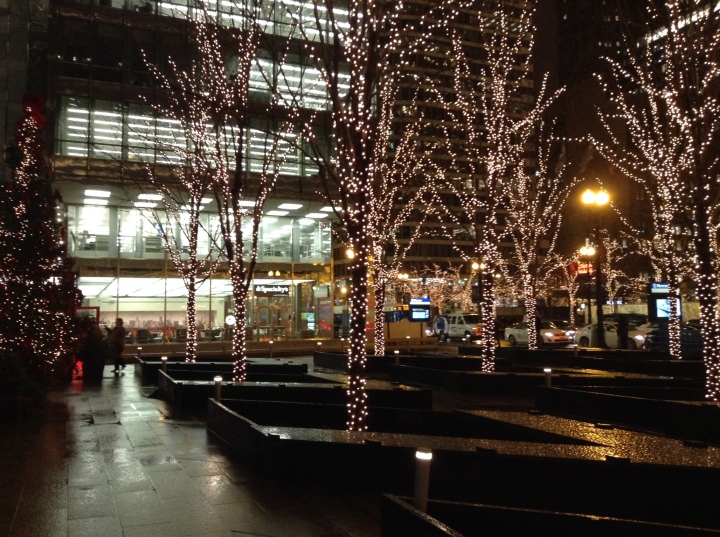 These ones by the river at LaSalle: 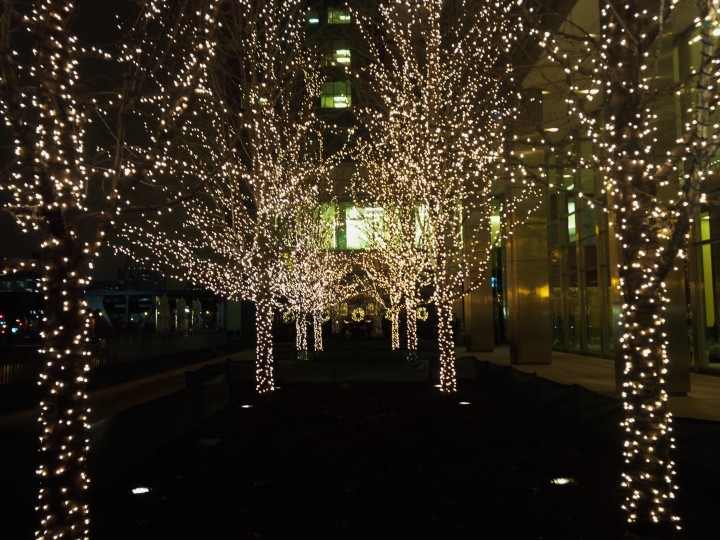 These ones on West Hubbard Street: 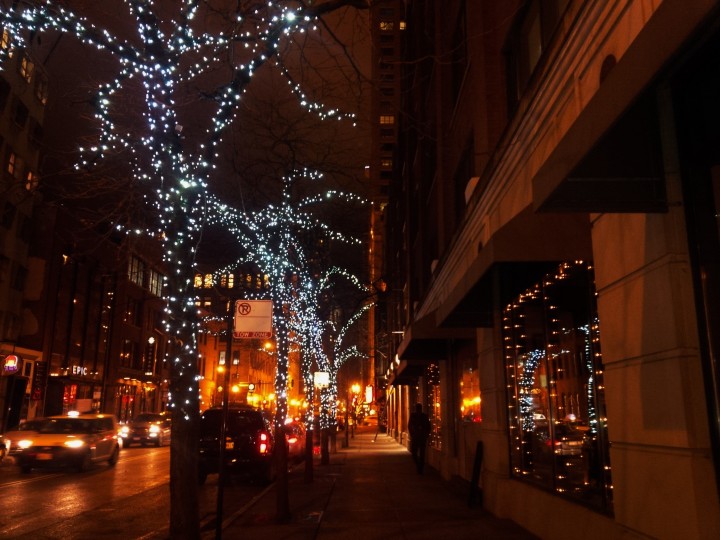 These ones outside the Tribune Building: 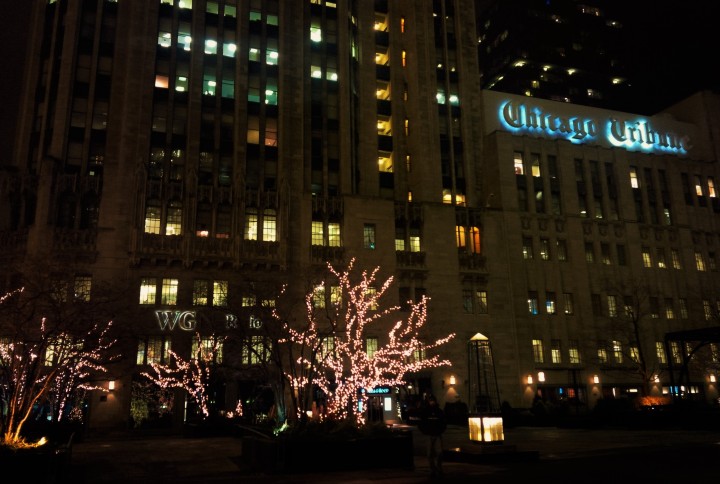 These ones outside the Apple Store in Lincoln Park:

All the way back to these ones on Michigan Avenue: 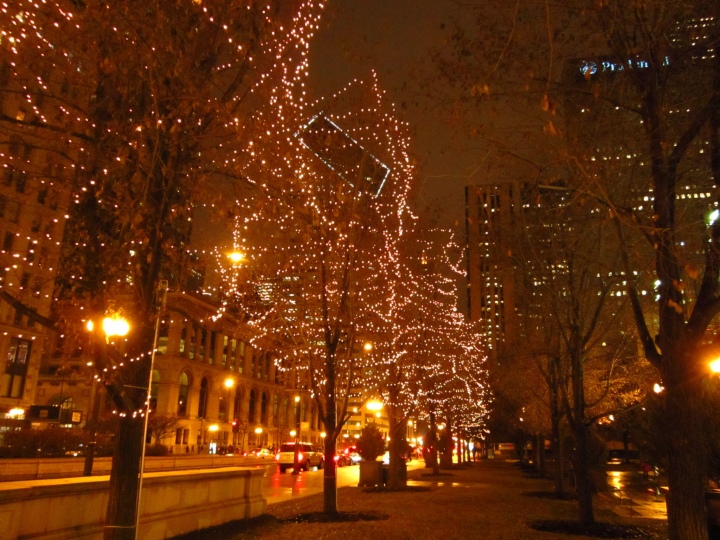 And those are just tree trees. Don’t get me started on the actual Christmas trees. In addition to the large one at the market, there’s a nice one in the Thompson Center, where the Illinois state government is based: 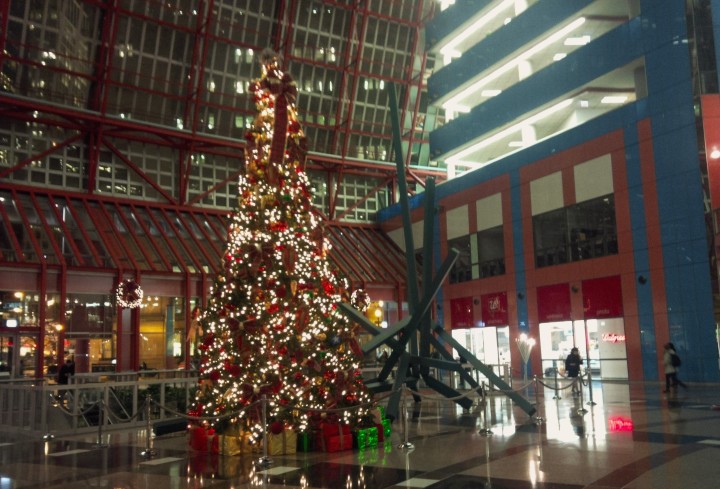 Some titchy ones outside the (supposedly haunted) Reid Murdoch Building:

A huge, sparkly one by the near the Tribune Tower:

And my personal wee favourite outside the Wrigley Building:

Obviously, it’s not just the City Authority that gets into the festive spirit either. Some of the good folk of the Wicker Park neighbourhood where I live really have pulled out all the stops this year.

And that’s pretty much it for my Christmas tour. To really hammer home the point that Chicago is the most Christmassy place in the Western Hemisphere, I’ll leave you with a tree that’s been dressed as a candy cane.

And a white horse drawn carriage being casually driven past Macy’s iconic Christmas trumpets. Is there anything more festive than that, really? 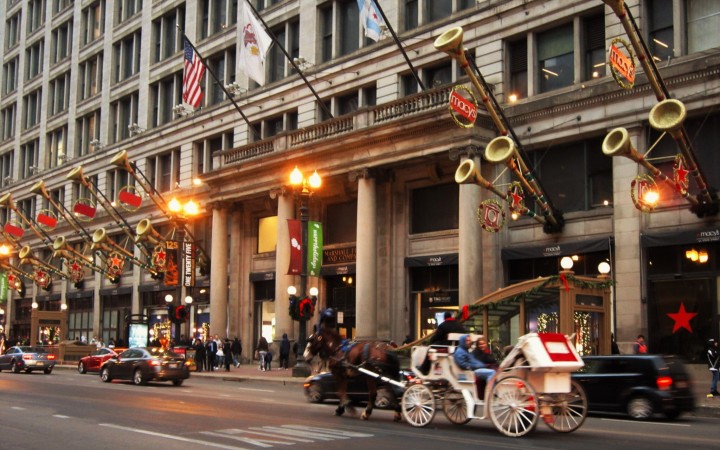 Of course, regardless of what city, country or continent I’ve been living in since leaving my hometown when I was 17, the real reason the Christmas decorations and the festive vibes always make me so happy is because I know that they mean I’ll soon be making the (in this case very long) journey home to spend the holiday with my family and friends. The best decorations, and arguably the best festive vibes, then, are always going to be the ones at the airport. O’Hare did not disappoint.

…and Merry Christmas to you all.