Today’s travels are notable for two reasons. 1) I will no longer be flying solo, and 2) I will not be using public transport. That’s right people, I get to go in a car with a friend!

What brings about such luxuries? It just so happens that a couple of hours down the lake from Niagara Falls, in Erie, Pennsylvania, lives the family of Colleen, one of my oldest friends. Well, I say oldest friends… truth be told, we haven’t actually seen each other for about twelve years and our friendship was probably at its peak sometime in 1997… but we share good memories of our first years at primary school, and thanks to the wonders of the social-networking age, one short Facebook conversation later, and I’m sitting in a Niagara coffee shop awaiting her arrival.

We road-tripped down Lake Erie, stopping for lunch in what was actually a nice suburb of Buffalo, and it was like those 12 years of non-communication hadn’t existed. We had so much to catch up on that the 2-hour drive flashed by and we arrived at her stunning lakeside house in Erie in no time.

And when I say stunning lakeside house I do mean that in the most literal way possible. This is just the conservatory. You know, a small glass thing you attach on to your actual house to maximise the view of the lake that’s sitting casually in your back garden. Wouldn’t mind.

As it was a beautiful day still, we decided to take advantage of said lake and do a spot of water sports. The house, like the others on the lake, has its own private bit of lake-beach at the bottom of the steep embankment at the end of the lawn, accessible by an amazing winding metal staircase expertly constructed by the Amish. There was a wee boat house down on the beach with an exciting array of sporting equipment, and we figured kayaking would be a good shout for day 1.

It was a good shout.

Not only was it a good arm work-out (Which I needed after 2 weeks of American-sized portions), there were reeds to explore, fish to watch, and when you couldn’t be bothered paddling any more, it was more than pleasant to just sit bobbing on the silent lake and chill. 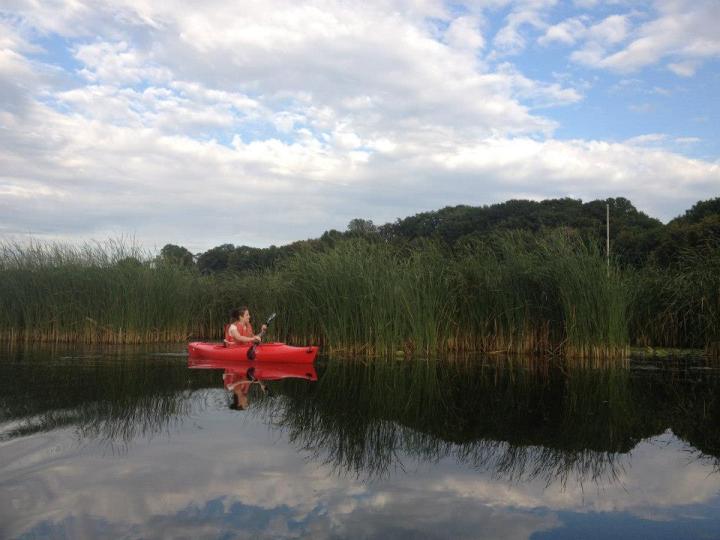 Did I mention that the lake was kind of beautiful? 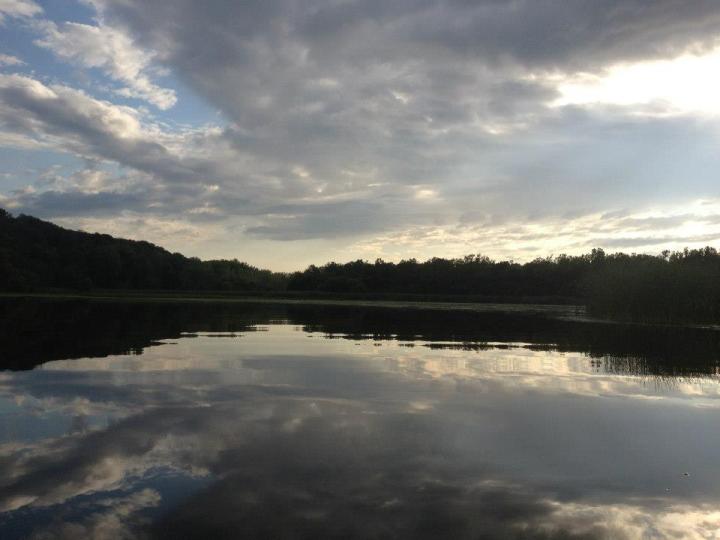 That night we hit the town, saw some sights and went to a great Mexican place for some humongous portions of spicy goodness.

Coming downstairs after what was probably the best night’s sleep I’ve had in weeks to find that pancakes were being made was a pretty great start to the day. Good chat was had with Colleen’s parents (who are are in the running for being the nicest people in the world), and her super cute dog, before heading off to one of Erie’s many attractions, Waldameer Amusement park!

It was definitely an excellent day out. Pretty much your standard amusement park – rollercoasters, rides, arcades… and I had my first corn dog!!! (which from the photo I am clearly quite pleased about)

When we’d had our fill of thrills, it was off to sample some  of the local cuisine. And nowhere looked more charmingly American than Sally’s Diner.

This place really is the real deal. Complete with Crown Vic service counter and enough chrome to blind a magpie.

Obviously we had curly fries.

It was then off to the liquor store for some rum, and back to the house to beautify ourselves. Cause tonight we’re Partyin’ (!)