It’s 10am and I’m standing on a bustling street looking at the sky, trying to work out if the sun looks discernibly different from usual. It doesn’t, but the fact that the sun is actually in the sky is more than enough change for me. There is a tropical atlantic breeze gently wafting hints of Cachaça and lime in my direction, and into my line of sight flies something that looks suspiciously like a pterodactyl. All this confirms that I have, against all the odds, made it to my final destination. Avenida Nossa Senhora, Copacabana, Rio de freaking Janeiro!

I haven’t slept for over 50 hours, I’ve spent two consecutive nights on airport floors, and I don’t have any luggage because my bag has gone on a solo jolly to Houston – but none of this matters because I’m now pretty hyper from seeing the sun and breathing all this Cachaça air so I give myself an hour to sort my life out and commence frivolity. There are 6 steps involved:

And so we arrive on the glorious Copacabana Beach, and if there had been any doubt as to where in the world we were, it was now well and truly extinguished. The landscape here is like nothing else I have ever seen – golden sands and turquoise sea with forest-covered mountains rising right out it. Kind of like Jurassic Park (which might explain the high-flying pterodactyls).

Back at our Airbnb we had met two other girls (a Canadian and a Brazilian) who were staying in the other bedroom, and we’ve brought them with us. Also joining us is Michel, who actually lives in the apartment. This little group of four tourists and a local made for quite a lovely beach jaunt, and we strolled in the midday heat along the entire length of the Copacabana and half way along neighbouring Ipanema until we found what was apparently the “perfect spot”, and sat down to some well deserved Brahmas.

Back to the pterodactyls. Apparently these are not actually survivors from the late jurassic epoch, but sea birds known commonly as frigates. And they’re blooming everywhere. I did a bit of googling and turns out that they are pretty fascinating creatures – able to stay in the air for up to two months without stopping, and recorded flying as high as 12,000 feet above the sea #BirdyFactsOfTheDay. I couldn’t get a good picture, but I stole this one off the internet (click pic for source). From below, their shape is very distinctive, and they are massive – watch them swooping in between these tropical sea mountains and then tell me you don’t think they could be dino-birds.

We basically spent the afternoon sprawled out on the Ipanema sand bonding with our new mates, haggling with beach vendors for cheaper drinks (and sunscreen), marvelling at the scenery around us, and going for the occasional dip in the  refreshing south Atlantic. The photo below pretty much sums up the general experience. 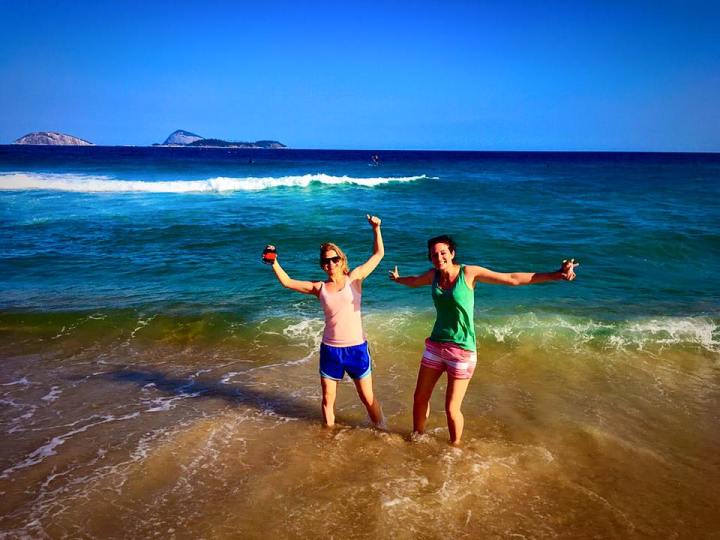 As the sun began to go down, it was suggested that we take a walk to the Rodrigo de Freitas Lagoon to see what delights that had to offer.

Naturally, we ended up taking a family-size swan pedalo out onto the water for a romantic sunset cruise because that’s what you do with people you’ve only known for 6 hours. I can’t really imagine anywhere else I’d rather be sitting in a giant man-powered swan, though. On one side you’ve got Christ the Redeemer sitting on top of his hill and on the other side you’ve got Dois Irmãos (or one of them) poking up into some wispy orange clouds. And there’s herons sitting on rocks, and pterodactyls flying overhead, and it’s basically the closest to paradise I’ve been for a while.

After the impromptu leg workout that none of us was quite prepared for, we made a new toucan friend in a nearby bar, then called it a night and went back to our apartment to eat, hang out and some very long-overdue sleep. 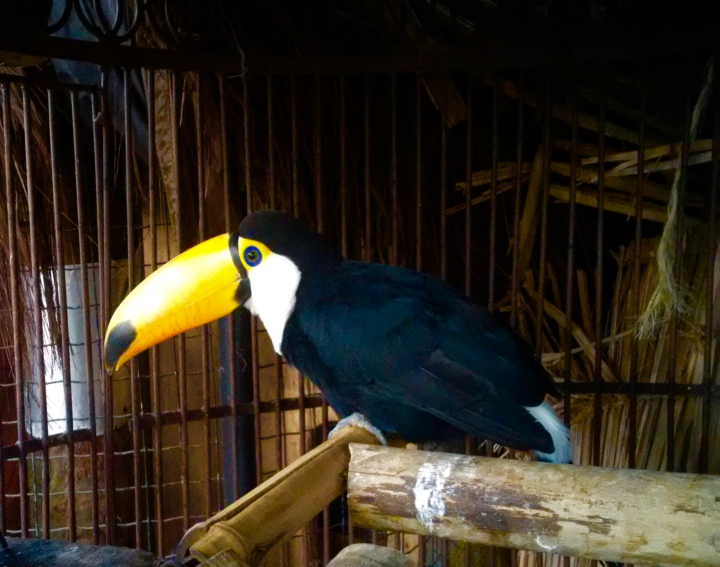 We rise bright and early after a pretty gosh darn good night’s sleep, happy to see that dousing ourselves in DEET had worked, and we haven’t been munched on by any Zika-infected mozzies during the night.

We grabbed breakfast from the supermarket down the street, then walked the three blocks back out to Copacabana beach, where we headed in the opposite direction from yesterday, towards Leme. But not before snapping a quick photo back towards Ipanema. Because pointy mountains. 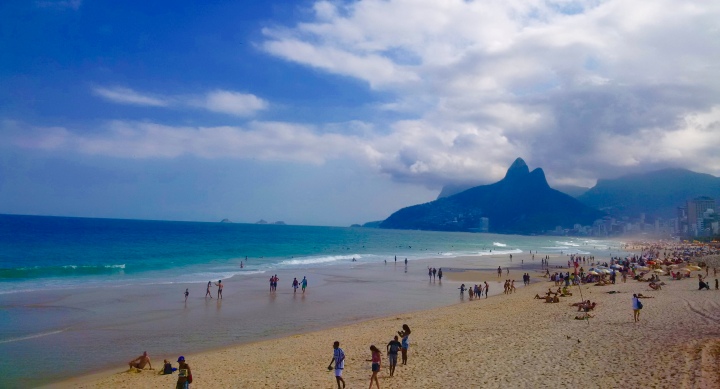 Copacabana was buzzing, and all along the promenade there was cool olympic stuff: sculptures, pop-up shops etc. Kinda almost makes me wish I was staying for the main event.

Outside the Copacabana Palace Hotel was a small political protest, which we stopped to listen to. In summary, there was a guy on the back of a lorry with a megaphone shouting various things in a mixture of Portuguese and English to a vaguely interested crowd. He ended with a rousing “Tourists, you are not safe here, welcome to hell”, and we decided to leave it at that and continue with our stroll. 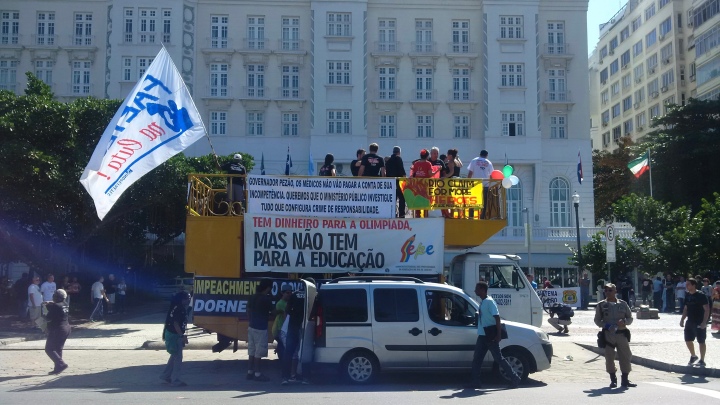 We walked past what was supposed to be the olympic beach volleyball stadium, but at this point more closely resembled something that Robinson Crusoe could have knocked up when he was bored one week… and It’s like 10 days to the Olympics.

We walked too far along the beach, and had to double back and climb over a hill – where we saw a bunch of tiny monkeys swinging in the trees. Nice and sweaty on the other side of the hill (only in the cab on the way back did we realise there was a tunnel with pedestrian access), we got our first glimpse of today’s main event: Pão de Açúcar, or as we touristas call it, Sugarloaf Mountain.

The sugarloaf mountain cable car is in two parts, the first of which takes you to the lower peak of Morro da Urca. The view from up here is insane, and there’s cool terrace from which you can view it from all 360 degrees. Did I tell you the view was insane? It’s insane! Christ.

Literally. There he is on that hill yonder.

And look at this. Apparently everybody here has a boat. What a disgusting display of wealth. I want one.

What’s more, there is a bar – which is handy for Christina as she’s going to need a significant amount of alcohol if she is going to make it through the next three cable car rides without having a panic attack. But also handy in general because beer is fun and it goes well with the view. Just look how happy I am. 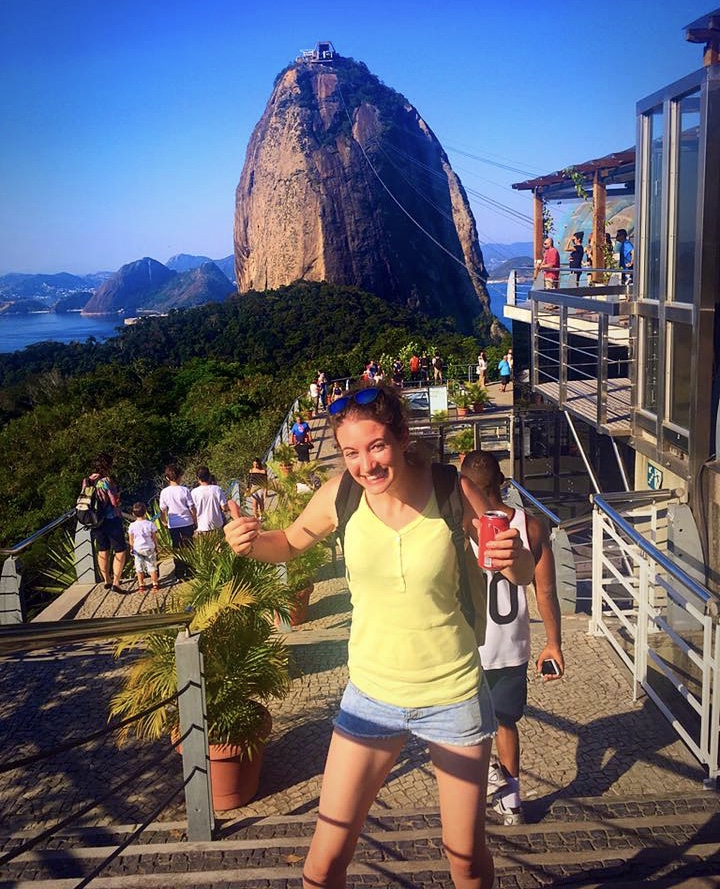 As you can see from the above photo, there is still a lot more altitude to be gained in the next cable car – the one that goes up to Sugarloaf Mountain itself. We hung out a little longer on the wee low hill so my companion could psych herself up for the ride – which was sketchy – but as she will be the first to tell you, so. totally. worth it.

There aren’t words for these scenes, people.

You can see the entire length of Copacabana Beach, curving off into the distance where it joins Ipanema Beach at the Arpoador peninsula. You can see Christ the Redeemer, the Dois Irmaos mountains, the lagoon, the conical islands just offshore… Ugh.

Even more joyously, there is another bar up here (the Brazilians sure know how to make tourist attractions), so you can just sit at a table, sip your Brahma, and stare out at the most beautiful landscapes you’ve ever set eye on.

And ask a fellow tourist to take your picture. Cause this view is too damn good for a selfie. 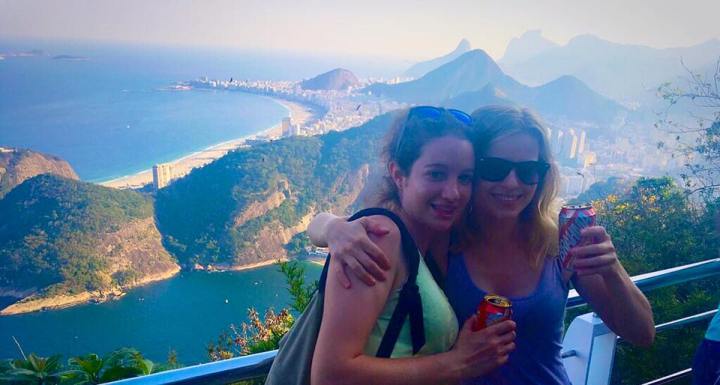 We survived the cable car down without too much drama, and there was just time to take the short walk to Vermelha Beach to take a look up at where we’d just been. 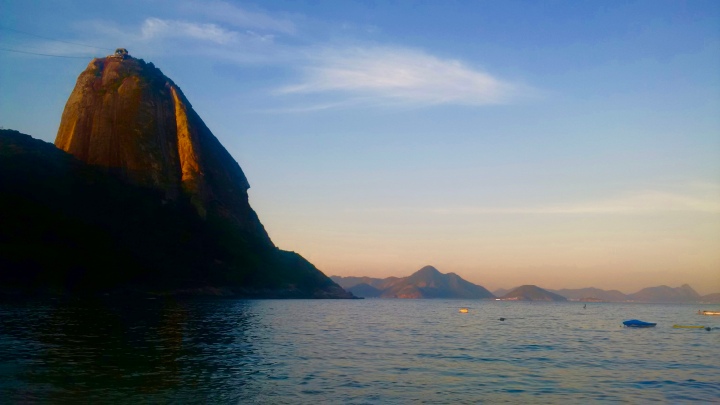 And that was the touristing done for the day. Next on the list is food. And Caipirinhas.

Because of the 25-hour delay to my Rio-bound flight, my third day here is also, unfortunately, my last. Our flight to Sao Paulo, where we begin our next adventure, is at around 6pm, so we did what any sensible girls would do with their last 5 hours in Rio: Ate breakfast and sunbathed on the Copacabana. And because it was a Monday, it was gloriously quiet. 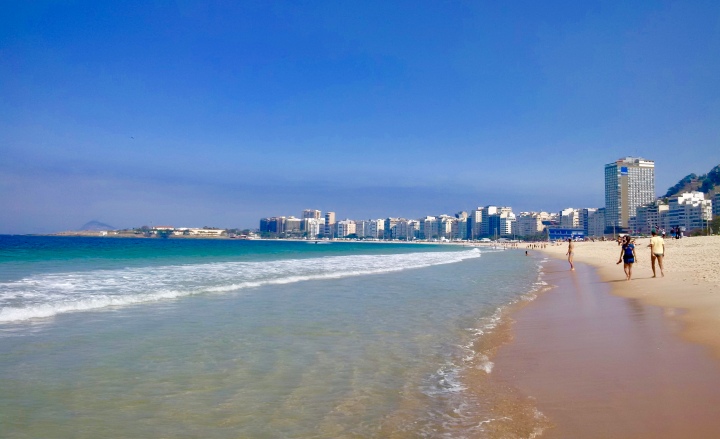 I think I’ll be coming back.

3 thoughts on “And She Dances on the Sand”