Deepest winter, which we are currently very much in the midst of, puts a limit on the amount of Norway’s great outdoors the casual tourist can reasonably engage with. The days are short, the roads are snowy, and all the country’s most popular fjord-based attractions are coated in several inches of solid ice.

We kind of knew this when we booked our tickets, but we weren’t very well coming all the way to Norway without seeing at least some of its unique scenery. Taking to the internets to explore our options, the evidence there overwhelmingly suggested the Norway in a Nutshell tour. And who are we to disagree with the internets?

The ‘tour’ is multimodal and self-guided, which I was skeptical about at first – getting ourselves on to boats and trains and busses from the right place at the right time doesn’t sound hugely relaxing – but all the reviews said it was easy and, again, the internets never lie. So we booked it.

We started the tour in Bergen (being self-guided, it’s very flexible and you can start/finish in either Oslo, Bergen, Voss or Flåm), waking up verrrrry early to get to Bergen railway station to pick up our tickets and catch the train for the first leg of our journey. I was still slightly skeptical at this point about how straightforward the whole process would be, especially since the railway station seemed to be mostly under construction, but there was a very obvious NSB (the Norwegian railway) office at the station, and they took one look at our Norway in a Nutshell [henceforth NiaN] reservation and printed us off all the tickets we needed for all the different trains, busses and boats in one nice big satisfying wad. For info, here’s a map of the stops and stuff: 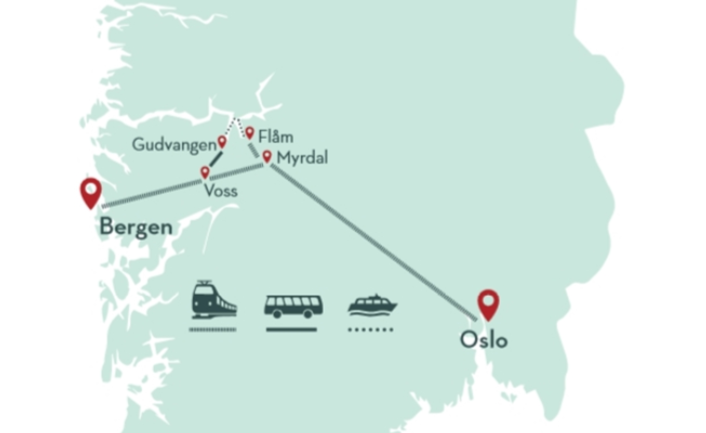 The first leg was the train from Bergen to Voss, a section of the popular Oslo-Bergen Railway route which is famed for being one of the most beautiful rail trips in the world. It was still dark when we departed Bergen, but as the sun started to rise we began to understand what all the fuss was about.

As I was off hopping from one side of the train to the other filming the stunning scenery we were passing, Alex got talking to a young Norwegian chap named Andreas who was off to Voss to do some powder skiing. We (well, mostly they – it was a bit too early for me to be any good at engaging in conversation) chatted the rest of the way about various extreme sports, the Norwegian model of wealth distribution and such things, then he added me on Facebook after we discovered that the drawback of Alex having a Scandinavian name in Scandinavia is that nobody can find him on Facebook. When the train arrived in Voss, we went to look for our bus, he headed off to the mountain with his powder skis, and that was that.

We got on a bus that we presumed was the right one, since the driver looked at our tickets and nodded. It was taking us  through the mountainous wilderness to Gudvangen, which is a wee village right at the end of the Nærøyfjord. Again, the views from the bus were beautiful – about as close to winter paradise as I think you can get.

Since this was a public bus not laid on especially for the NiaN tour, and we didn’t know if there was anybody else on this bus actually on the tour, we weren’t sure if we would know when to get off. We were vocalising such concerns to each other when an English chap in the seat in front of us turned around to tell us that he was on the tour too, and that he was similarly unsure about if we would know when to get off. His name was Ken, he was from Coventry, and he became our new bus friend. Turns out we had no need to be worried about when to get off because when we arrived at Gudvangen the driver was all like: “This is where you get off if you are on the Norway in a Nutshell tour” and it was all very obvious.

We had about 40 minutes to wait at Gudvangen in this cool sort of tourist centre thing with a gift shop, restaurant and great views down the fjord that we are about to sail down. 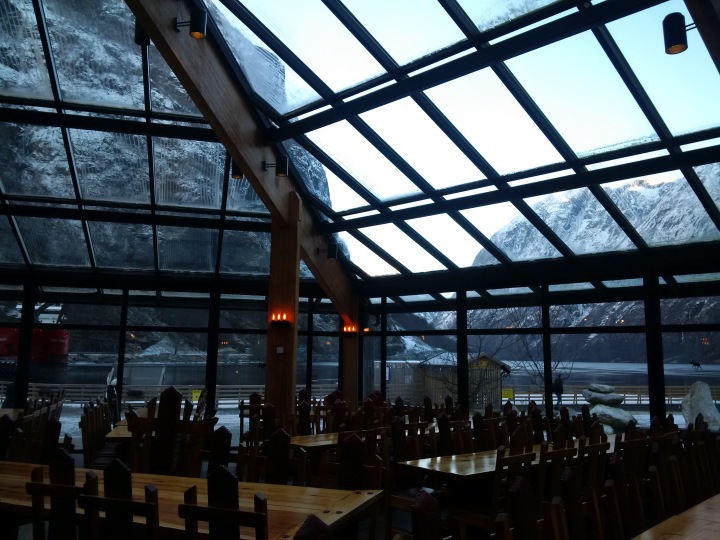 So we looked out the window, got to know our bus buddy Ken a bit better, ate waffles and sat in actual viking thrones, generally having a grand old time until we caught sight of our boat chugging up the fjord.

We boarded the boat and set sail. Thankfully there was an inside lounge area with a bar selling hot drinks and alcohol because it was absolutely bloody freezing outside. But outside was where all the shit hot scenery was, so we developed a strategy of going outside until our hands and faces just about froze, then heading in for a cuppa and a warm seat. Those scenes though… 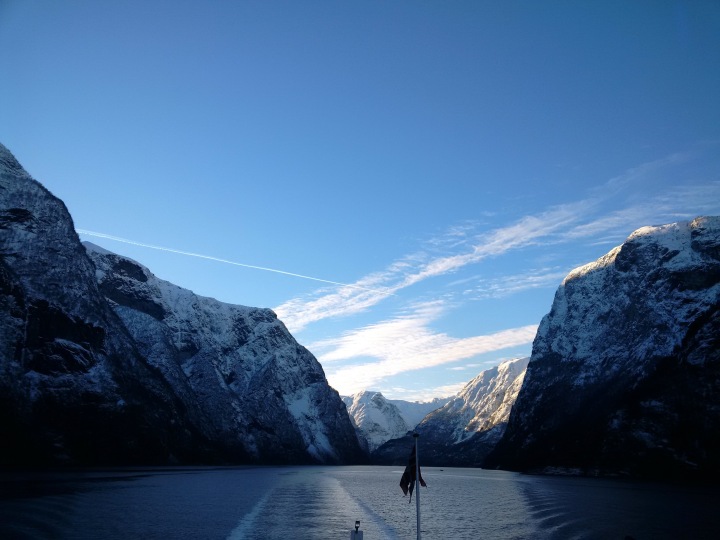 Our bus friend Ken had made another friend, an American called Evan, who he introduced us to. We spent our indoor time getting to know our new travel buddies and our outdoor time gazing awestruck at the snow-covered mountains that just rise right out of the water. So calm and so cold and completely mesmerising. 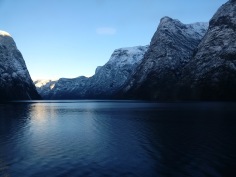 Travel companions also come in handy when it comes to taking extra-cute photos of us with amounts of, admittedly slightly overexposed, background fjord that a selfie just can’t compete with.

After a couple of hours cruising down the fjord, then branching off down another fjord, the boat dropped us in in Flåm. The picture below isn’t actually Flåm, but we passed it on the boat just before getting to Flåm and it kind of looks like Flåm so it will do for illustrative purposes, and also I like the photo and want to put it in the blog and can’t find a better slot. Enjoy. 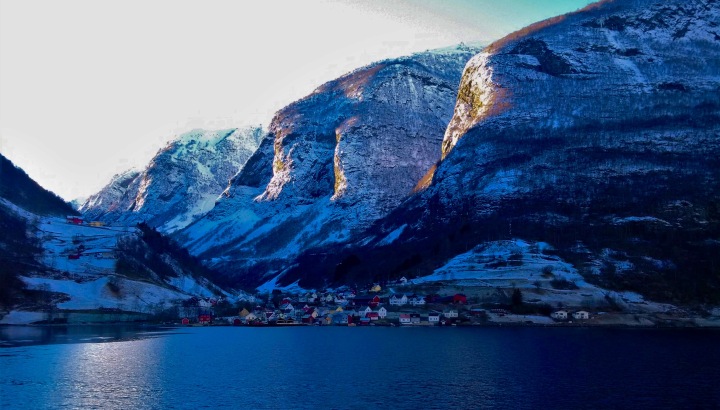 Flåm is a village at the end of Aurlandsfjord, the branch of the fjord we had just sailed down and, despite having a population of about 350 (yes, three five zero), it gets about 450,000 tourists a year (mostly in summer). Sure, it’s a quaint wee picturesque village and all, but the settlement itself isn’t going to blow anybody’s mind and certainly isn’t going to attract half a million sightseers. What are we all doing here then?

To ride the Flåm Railway, duh. With a length of about 12.5 miles, it’s pretty short as far as railway journeys go. But that’s definitely not the point. This railway climbs 2,831 ft in that short distance, making it one of the steepest standard-gauge railways in the world. It winds its way up the mountains via a series of snow shelters, tunnels and bridges, stopping off at a (currently frozen) waterfall, and arriving in Myrdal about 40 minutes after departure. And holy shit let me tell you about the scenes. Actually I’ll mostly just show you.

About 3/4 of the ride is all mountains and valleys and gorges and waterfalls. They let us off the train at Kjosfossen, which (google it) is usually a raging torrent of meltwater but is currently frozen solid and covered in snow. Good icicles though.

There are these cut out sections of mountains – tunnels with a view – with vertical drops into the valleys below, and it’s quite the visual experience going past all the support beams at speed. If you focus on the valley, they all disappear and you get what seems like an unrestricted view and it’s kind of like you’re going in slow motion, until you accidentally focus on the beams and you remember you’re on a speeding train on the edge of a cliff inside a mountain. 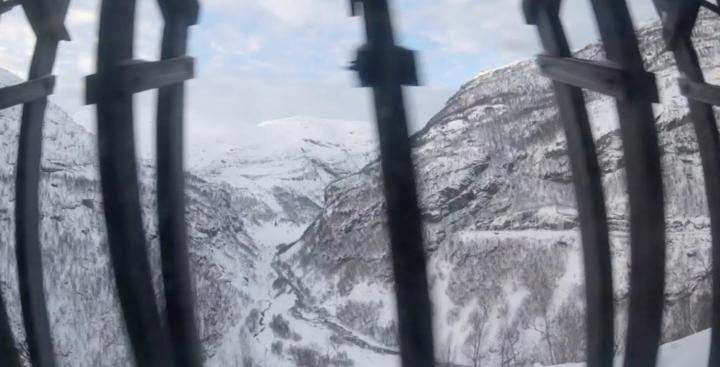 The scenery here made me really glad we were doing this in January. I’m sure it’s also beautiful in the summer when everything is green and the sun is out, but the snow and ice and grey skies gave it this little extra something. 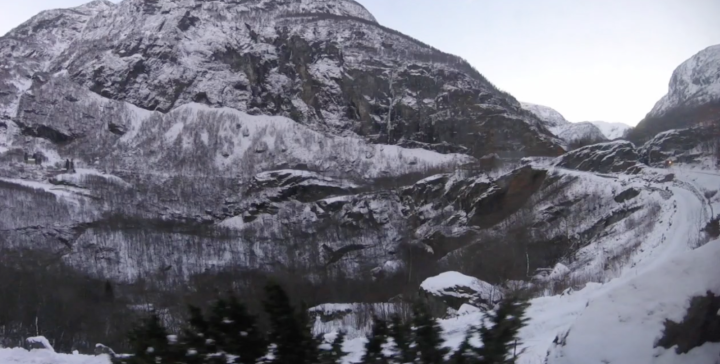 The inside of the train is also super quaint. It’s all dark wood and plush seats with red upholstery and brass fittings. Really quite charming. We sat with Ken and Evan passing around a bottle of Russian Standard that Ken had in his bag and feeling truly Scandinavian. 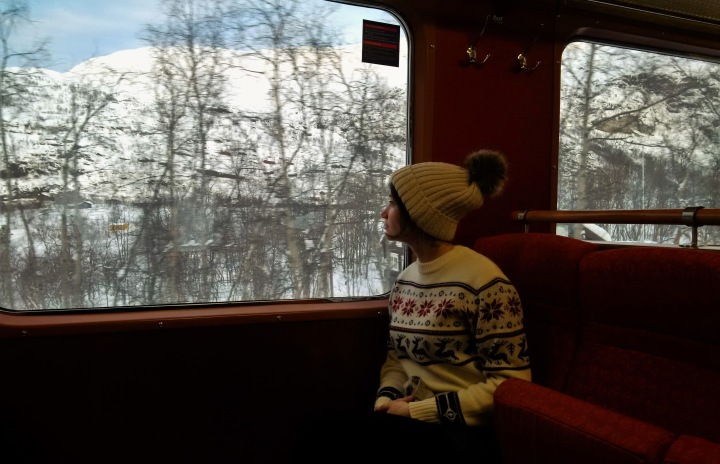 After about 30 minutes the terrain changed. Well, there’s still mountains around, but we’re not going through them anymore.

We began to pass cute little wooden stations that I have no idea how people actually get to, which was a sign that our time on this spectacular railway was coming to an end.

Arriving in Myrdal, we were to bid farewell to bus friend Ken, who was carrying on to Oslo while we were going back to Bergen. To immortalise our little travel crew of four, we asked a nearby person to take a photo of us. 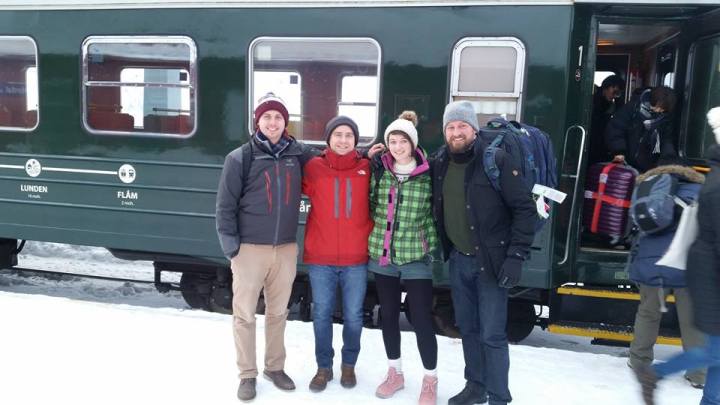 Little were we to know that this casual act of photography would spark an entirely new travel crew for our journey back to Bergen. Nina (American but living in Bergen) and her friend Tom (American and visiting) turned out to be pretty cool people, and by the time we got back to Bergen a couple of hours later, we had bonded sufficiently that we were all keen to go out for burgers and beer.

To top everything off, Andreas, who we had met on the first train to Voss, was, completely by chance, reboarding the train at Voss on his way back, and Alex just happened to spot him getting on at the other end of the carriage. He went to fetch him, and our beer and burger crew was up to six. Nina got her Norwegian boyfriend Victor to join us, which rounded us off at seven, most of us who had never met before today.

Naturally, A beer and a burger turned into 7+ pitchers of Hansa at Sjøboden, a pub in one of the old Bryggen buildings, which then turned in to sitting in an Irish pub until it closed, cementing my view that spontaneous travel crews are truly one of the best things in the world.

The Norway in a Nutshell tour turned out to be a great shout. Easy as pie to self-navigate, stunningly beautiful every inch of the way, and we met and had a good time with some really awesome people that I hope we meet again one day in some corner of the globe.

Also, here’s a wee video I put together of the tour (and some bergen hiking too).

Norway in a Nutshell 2017 from Hannah Muirhead on Vimeo.

One thought on “Norway in a Nutshell”