Every time my parents decide to go on holiday for Christmas, I somehow end up living abroad that year and having to double the amount of flights it takes me to reach my turkey with all the trimmings. This year, I have flights booked from Edinburgh (my hometown) to Vienna (where I’ll be spending Christmas with my family), but spontaneously relocating to Chicago has turned what was going to be a cheap and easy trip into something neither cheap nor easy. Luckily, my amazing boss has decided to close the office the whole week of Christmas, so I’ll have plenty of time to catch the 8 flights it’s going to take me to get from Chicago to Edinburgh to Vienna and back – all, joyously, with layovers. No rest for the wicked, as they say. Or the Geographically noncommittal, apparently.

Arriving in the city centre, we were greeted by a giant Christmassy building that restored any festive cheer that may have been lost running through Schipol Airport listening to the announcements that our gate was closing (we made it with seconds to spare). 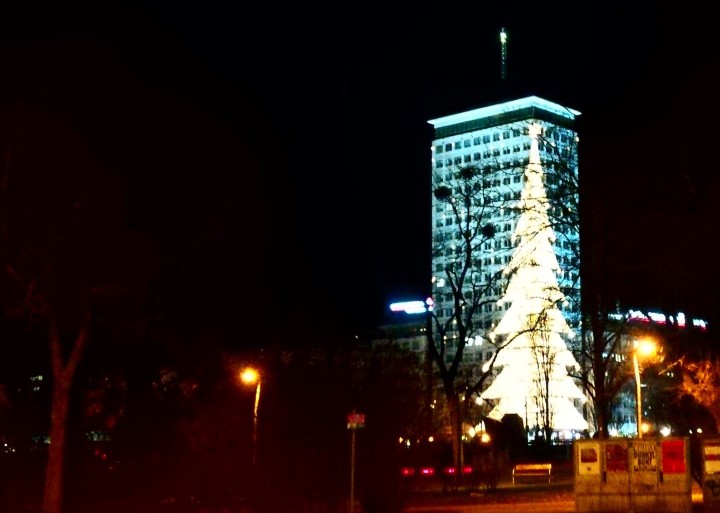 We are staying in a cute apartment on the south side of the River Danube, within walking distance of the city centre. This is good because the city centre is where the Christmas markets are, and that’s practically the whole reason I wanted to come here. Vienna does Christmas markets in a big way. Edinburgh and Chicago each have pretty decent markets (I’ve been to them both this year), but here they don’t just settle for the one. Vienna is an old European city and, like old European cities, it’s built around quaint little squares. In December, each of these historic gathering places transforms into a splendid Christmas market. It’s now Christmas eve and we have one night in the city before Christmas tomorrow, so LET’S GO TO ALL OF THEM!

The first market we came to on our excursion into the heart of the city was the Weihnachts Markt at Am Hof, which is one of the city’s most historically important squares.

There was orchestral carols playing and everybody was very much in the Christmas spirit, eating strudel, drinking wine, and generally being merry.  We grabbed a much-desired glühwein and stood around a wooden table, looking at the impressive architecture that was on all four sides of us, and enjoying the cosy, festive atmosphere.

Continuing our market quest, it wasn’t long before we came to the Altwiener Christkindlmarkt, which is situated on on a wee cobbled street right in the heart of the old city, and is one of the smallest Christmas markets in Vienna. The wares on offer were much the same as at the last market (ok, and every other Christmas market ever), but you don’t go for the novelty, you go for the glühwein, the potato noodles, and the festive cheer. And the stuff here were as good as I’ve ever had.

Again, the intricate architecture of the surrounding buildings was glorious, and suitably reinforced the olde worldly charm of the place – you can just about imagine you’re in the Austrian version of A Christmas Carol.

Next on our expedition was the biggie – Vienna’s piece de la resistance of Christmas markets – the Wiener Christkindlmarkt at Rathausplatz in front of the stunning town hall. It may not be the most classy, or the most charming, but it’s certainly impressive.

There is row upon row of stalls selling everything from giant sausages through to hot apple punch, and it’s heaving with merry shoppers. We got some food here because so far we’d just been on the hot wine. I had a käsewurst (a German sausage bursting with cheese) and a delightfully greasy potato fritter thing which definitely soaked up the glühwein.

Also, each one of the trees in the surrounding park has a different type of Christmas light, which is kind of cool.

We’d had our fill of Christmas markets for the night, so we called it a day (ok, so we didn’t make it to all of them, but three is pretty good for one day, I think) . Nearby was the impressive Austrian Parliament Building, so we took a wee peek at it before going back to the flat. Designed in Greek Revival style by architect Theophil Hansen, it has over 100 rooms and was completed in 1883. Lovely.

Now, it’s time for bed. I just hope Santa can find us in this foreign location…

Christmas morning in Vienna is not too shabby a thing. Santa managed to locate our stockings and, as usual, has been very generous indeed. Now, naturally, we’re drinking Aperol spritzers and eating cheese and ham as the parents attempt to make Christmas lunch in a kitchen that doesn’t have a proper oven (so much for the “fully equipped” kitchen we were promised).

Given the oven situation and the fact we’re in Vienna, one of us had the genius idea to have Christmas turkey schnitzels for our festive lunch. Halfway between the traditional Wiener schnitzel and the traditional British Christmas dinner, this seems like an excellent compromise for a bunch of Brits in Austria at Christmas. We’d bought turkey steaks and all the other ingredients yesterday, so all that remained was to work out how to cook it.

We had a traditional Austrian soup to start with, and a nice bottle of Henkell – Germany’s most famous sparkling wine. The schnitzel turned out a treat. Ok, so it’s not the most festive-looking platter of food you’ve ever seen, but it tasted awesome, and it was turkey, and there were ‘roast’ potatoes and these are the main things. The Poinsettia on the table more than made up for the lack of Christmas on the plate…

…And with a bit of imagination and some artistic flair, I managed to add a whole other layer of cheer to it. The versatility of leftover schnitzel is truly amazing. That’ll be a nice snack for later. 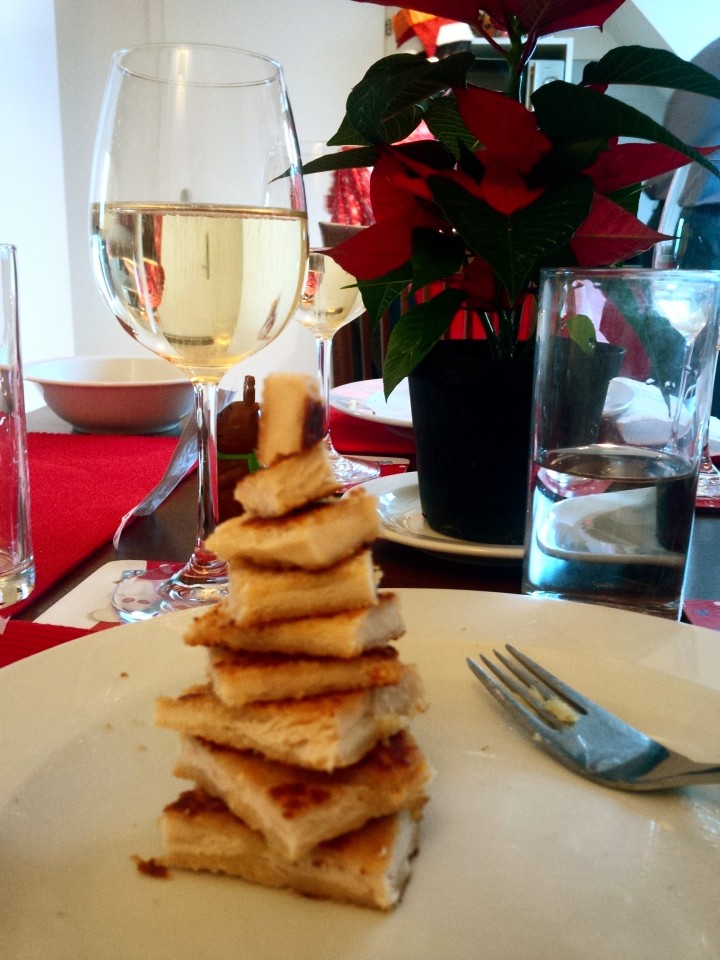 …and then we decided to go to one last Christmas market – the beautiful one at Maria-Theresien-Platz, with stalls branching out four ways around a massive statue depicting Empress Maria Theresa, the only female ruler of the Hasbburg Empire. 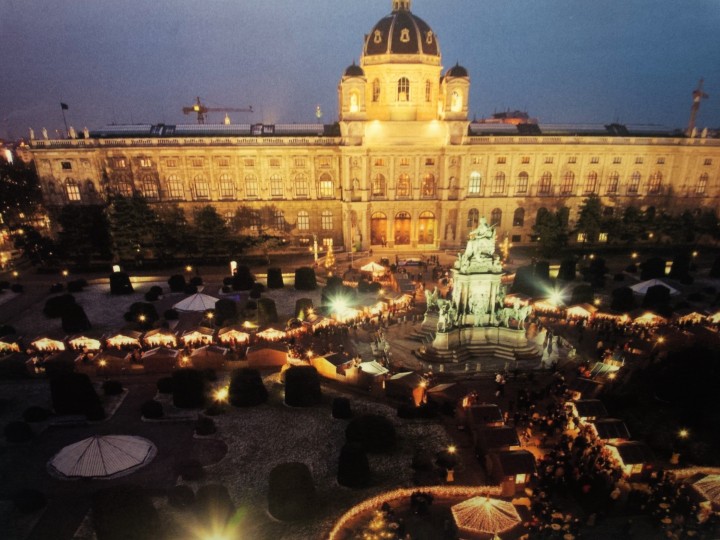 For somebody who loves Christmas and Christmas markets so much, it’s been a pretty excellent couple of days. We still have a lot to do in Vienna, though, so watch this space. For now, it’s  time to watch cheesy classic movies. Goodnight!