I have been looking forward to today for a pretty long time. I persuaded my friend to drive us for 11 hours through batshit insane Honduras to get here, and we were up and showered by 7am, driving from our sleepy little Oasis hostel at the beach town of Las Peñitas to nearby León to meet a dude called Aris at his office. Aris operates an adventure tour organisation out of León, and his most popular excursion is one that people come from far and wide to experience. Volcano surfing.

Volcano surfing (or volcano boarding) is pretty much what it sounds like. You climb up a volcano with a board, and you slide down on the board. The volcano in question is Cerro Negro, the youngest volcano in Central America and also one of the most active (although it hasn’t erupted since 1999). The volcano is pretty unique in that, when it erupts, lava comes out of fissures near the base, and tephra (ash and lapilli and rocks and what not) comes out of the top. Not only cool and interesting, this means that there’s all kinds of loose, small-particle dry shit all over the cinder cone. Which is perfect for sliding down.

We (Aris, me, Ricardo and a driver) piled into a Toyota pickup and drove for a bumpy 45 minutes to the base of the volcano. From the approach you’re given a good idea of why she’s called Cerro Negro (black hill). Pretty damn black as far as hills go. 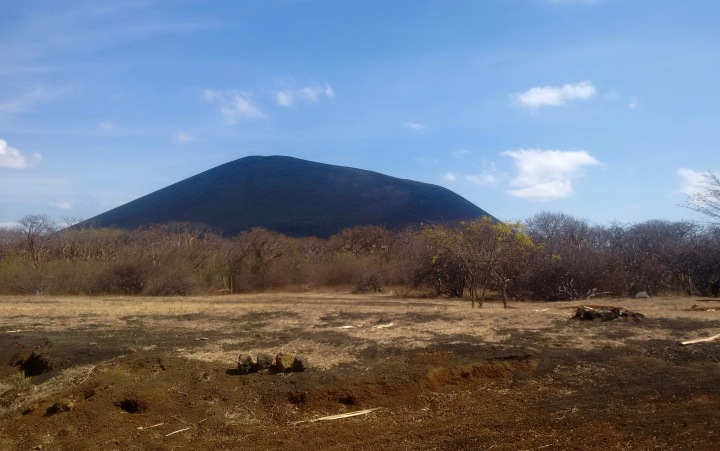 We sign the inevitable waiver, grab the boards from the back of the truck, and start the climb. And climbing this thing is no easy task in the 30°C heat. The boards are heavy and the terrain underfoot is a mixture of gravel, sand and big wobbly rocks, so you’re pretty much taking one step forward and sliding half a step back, although I don’t really care as I’m so excited by all this lava and stuff that’s surrounding me. Volcanos are the coolest.

Up and up we climbed, and the view got better and better. You can see the black lava field, in contrast to the grey of the tephra that we’re now climbing on. Then we reached the ridge, and got pretty good views down into the secondary crater. 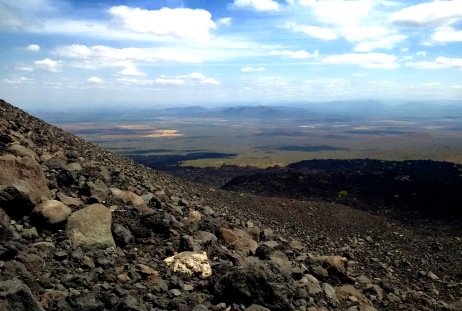 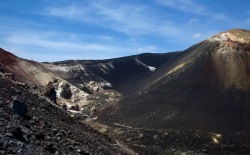 When we get to the top, we ditch our boards and bags and hike up a little bit further to the top of the principal crater, which is steaming like a Glaswegian on a Friday night and probably the coolest thing I’ll see all year. To demonstrate the active nature of this volcano and the geothermal energy present right underfoot, Aris digs a small hole about 2 inches deep and gets us to stick our hands in it. It’s HOT. Like hot enough to cook a fish on (Aris says he has verified this fact with actual fish cooking).

Obviously, we posed for some volcano-top running-round-the-photographer panorama pics. Cause those are the best kind of pics.

With all that well-mannered scenery viewing out the way, the time came to get suited up and prepare for the slidey part of the excursion. Because you’ll be hurtling at speed down loose tephra containing particles varying in size from dust to chunks about 2 inches in diameter, you need to wear a jumpsuit so your skin doesn’t get shredded should you come off the board. You’ll also need goggles so that the stones that will come flying at your face don’t destroy your corneas, a mask so you don’t get too much volcano dust in your lungs, and gloves (see shredding point). This is all very fetching. 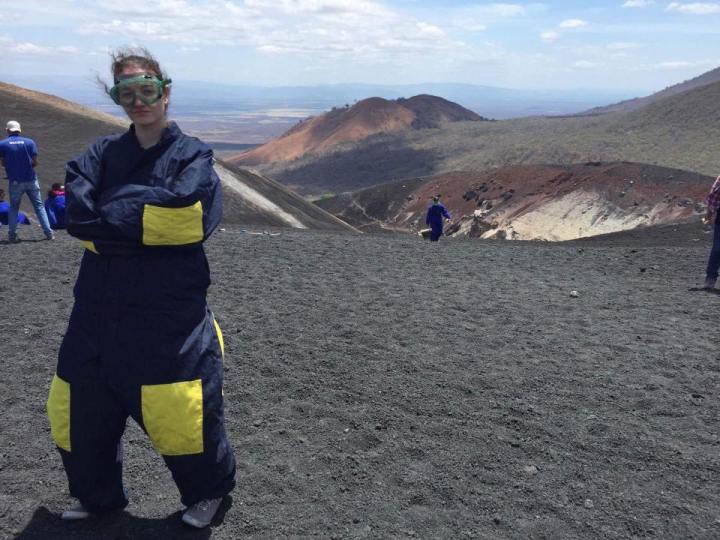 Then we got our boards, edged over the side, and sat for a while watching the people in front of us begin their hurtle, our feet dug into the gravel to stop gravity doing its thing just yet. We were going for the sledging method, because it looks like the most fun.

It is possible to “snowboard” down, and I had definitely considered that option. I’ve been snowboarding for over half my life, and have some pretty decent skills, but everybody I’d seen (on the internet previously, and here watching it live) trying to do this snowboard-style was failing miserably, even those who were apparently competent on a board. They say, and I believe them, that the whole turning thing is quite another game on this surface, and I was not about to waste my only shot sliding down this hill going back to snowboarding basics, trying and failing to turn, and spending half the time on my ass. Nope, I wanted to plant said ass on my plank, point one end of it down the volcano, and let it rip.

And oh my god it was fun.

This stuff is FAST, dude.

And they weren’t lying about being pelted in the face by rocks. The faster you go, the faster the rocks ping up at you, but still your only aim is for speed. To go faster, you lift your feet off the ground, lean back and whooooosh. Hello gravity. I’m sliding down an active volcano at 40mph (or something similar [the record is 60]) thinking about who the hell first thought that this could be a thing, and wondering how I might possibly thank them for their crazed ingenuity slash services to humanity.

I reach the bottom and put my feet down to stop myself. I’m covered from head to toe in volcanic ash. It’s in every orifice despite all the coverings provided. I take off my shoe and black sand pours out of it. My face is probably just one greyish black blob except for the big white grin that’s currently all my mouth can do right now. I look back up at the hill. That was fucking awesome.

Buzzing, we pile back into the Toyota and make our way back to León. Apparently included in the $30 price of this excursion is a cold one in the bar next to Aris’s office, and we weren’t about to turn that down. We continued the risk-seeking behaviour of the day by sitting in the un-covered section of the bar, fully exposed to the mangos that were crashing down from the central tree at a rate of approximately one every 10 minutes. We were still filthy from the volcano. Dirty nails are generally one of my least favourite things in the world but I let it slide today because It was volcano dirt and I was drinking a volcano beer. Viva la Toña. 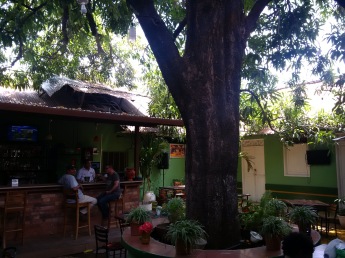